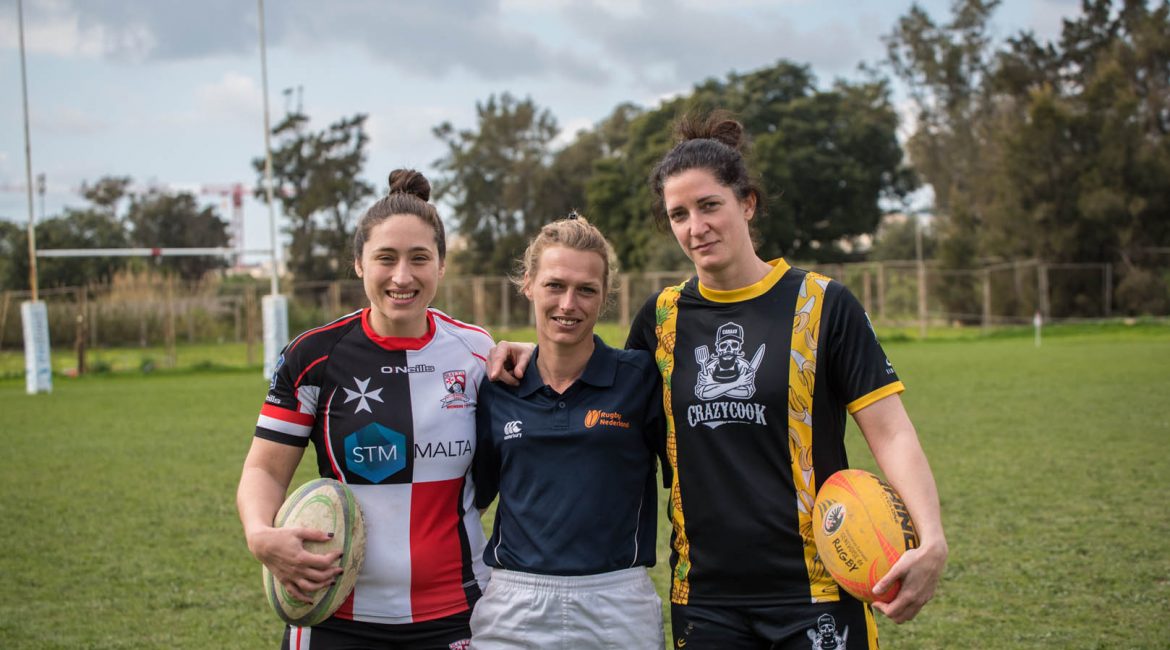 Over the last few years, the Malta Rugby Football Union has taken advantage of the phenomenal winter weather that our island has to offer to bring a whole host of foreign women’s clubs to Malta for a weekend of exciting Rugby.  This year was no different, with four foreign and two local teams raising the bar and showing the enjoyment and excitement that comes from Rugby 7s.

For this year’s edition of the tournament, which was a labor of love for MRFU women’s rep Kirby Attard and the council as a whole, the MRFU welcomed the Crazy Cooks (a mixed team made up of players from Switzerland, France, the UK, and Ireland), the Zurich Valkyries (who fielded two teams), and the French Les Pandettes.  Malta also fielded two teams, the Malta Barbarians (which comprised of players eligible for National Selection) and the Malta Pirates (made up of locally based players who may not be eligible for National Selection).

The tournament was held over two days days, with the first day comprising of a Round Robin style of fixtures between all 6 teams, and on day two the top 3 teams of Day 1 would be put into a Trophy Pool whilst the bottom 3 would play in the Cup Pool.  This day two separation kept the competition exciting and competitive  for everyone to the end.

Day 1 would close with the Malta Barbarians leading the pack, winning all 5 of their games, and followed by the Crazy Cooks and Les Pandettes, with 3 wins and a draw a piece, forming the Trophy pool for day 2.  The Malta pirates and the two Valkyrie  teams would play for the Cup. The day was filled with high intensity rugby, a byproduct of the short matches in 7s competitions, with all teams firing at the try lines producing intense score lines.

Day 2 was no different, with two separate pieces of silverware up for grabs, everyone had something to play for and it showed in the passion on the pitch. Though it was clear that the Crazy Cooks were not content with finishing 2nd in day one, as they went on to dominate in their Trophy pool matches with a confident win (24-0) against Les Pandettes, and whilst the Malta Barbarians also had the trophy in their sites after beating the French ladies (20-7) it was the Cooks who went into the final match as the favorites.  The final trophy match was not an easy one for the two passionate teams, but in the end the Crazy Cooks would out maneuver the Malta Barbarians to walk away with the win (5-24) and the Trophy.  The Cup Pool was clearly a better venue for the Malta Pirates who walked away with the Cup after victories against both Valkyrie teams, who only managed a draw in their own match.

Tournaments like this offer a great opportunity for local players to test their metal against a variety of opposition.  This chance was not missed by National Women’s Coach, Carmelo Longo, who used the tournament to test out various players with National Team aspirations, particularly players like Donevellon Sladden, Dorien Jager and Marion Azzopardi, who stood out on the pitch for the Barbarians.  Special mention must also be given to Katka Vrbacka and Charlotte Sultana Evans, who aside from being commendable players for the Pirates, were also the ones to bring together and coach the players that formed the second Malta Team.

With 7s being the Olympic standard for Rugby, the MRFU will be doubling its efforts on 7s Rugby development in the future. This will not only expand the opportunities for different people to discover and enjoy Rugby, but also provide new avenues for success on the international stage to mirror the success of our national 15s team!