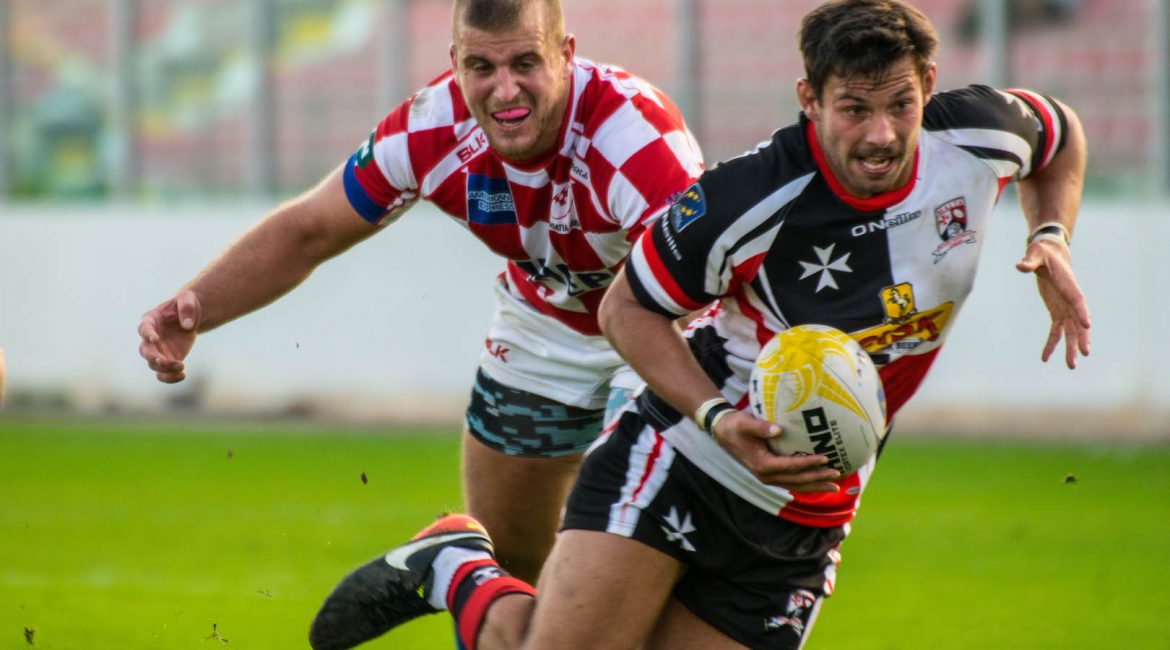 The spectators at Hibernian’s Stadium were treated to a spectacle of running Rugby from start to finish, that at times left Croatia grasping at shadows, Malta winning to the tune of 56 to 8, in this Conference 1 South Division Rugby game.

Malta and Croatia have been playing each other for the last ten years, with most games going to the final whistle, but this game blew out to the biggest win yet for Malta.

It should have been more, as several other breakouts failed at the final pass, with the line open.

Croatia were in the game until the final whistle, but had no answer to the intensity of the Maltese attack or defence.

The teams traded penalties in the first five minutes as play swung from one end of the field to the other. Croatia scored from wide ball with their second rower Brajkovic in the line swinging the ball to Pavlovic out on the wing to score.

But then Malta switched into overdrive and began to swing the ball from side to side with Tom Holloway(9) and Quarendon(10) controlling the direction and tempo. Dudman(11) was running strongly out wide and scored two tries using his pace, with O’Brien always looking for action coming into the backline from fullback.

Croatia were trying to get into the game with their big forwards running, but the Maltese defenders were smashing them behind the gainline with Busutill(12) and Holloway(13) putting in some crash tackles.

On attack Malta were faced with a crowded midfield with Croatia putting both forwards and backs in the defensive line, but quick ball through the hands put their runners into space and Quarendon’s intelligent kicking forced Croatia to back peddle.

Luke Watts(6) scored after O’Brien used his speed to run back a kick from inside his half, down the right with an inside ball for Watts to score in the corner.

A great act of sportmanship was shown to Mark Davey(8) as he went down hard in a tackle, Croatian Dylan Rowe(8) stayed with him to make sure he was ok, as played moved upfield. Davey retired concussed.

Just before half time after a number of pick and goes near the Croatian line had forced a scrum to Malta, Holloway(9) ran at the line and sent a flat pass to James Kirk(14) to score out wide, O’Brien judged the swirling wind perfectly to nail the conversion. Making the half time score Malta 30, Croatia 8.

The second half began with substitutes for Croatia as they looked to get back into the game, but immediately their sub Peric(19) was yellow carded for a high tackle.

Malta kept up the intensity throughout the second half, their pressure in both attack and defence did not allow the Croatians any room to move. Dropped balls and wayward passes thwarted their efforts, but it was the Malta pressure that prevented their comeback.

A big scrum from Malta shunted the Croatians backwards stealing their ball and launching another attack out wide, again with O’Brien in the line. But some passes are dropped with the swirling winds playing havoc with the long passes.

Holloway(9) scored after almost the whole team handled with forwards hitting it up and then the ball going wide, with inside runners then swinging the play off in other direction finally into the hands of the busy scrumhalf to score under the posts.

Croatia would not give up and they kept bashing away, trying to create space out wide, Rob Holloway and Captain Busutill put in some BIG tackles smashing runners backwards.

But the fifteen man Rugby that Malta was playing, was just too slick, with fast passes and running putting players into space, Anthony Harvey(3) scored after a pick and drive with all the forwards shunting him over.

Thomas Holloway(9) scored again after another backline move out wide and around towards the posts with the backs running riot again with quick hands.

Holloway sent a cheeky lobb ball over a ruck for O’Brien to run onto to score, with a swan dive under the posts.

Coach Damian Neill sent on his bench to give his young players game time, but the momentum did not slow and the game ended with Malta again attacking the line. Referee Francois Bouzac probably one of the best Referees to come down from France deserves applause for his control of the match.

Men of the Match: Every Maltese Player.