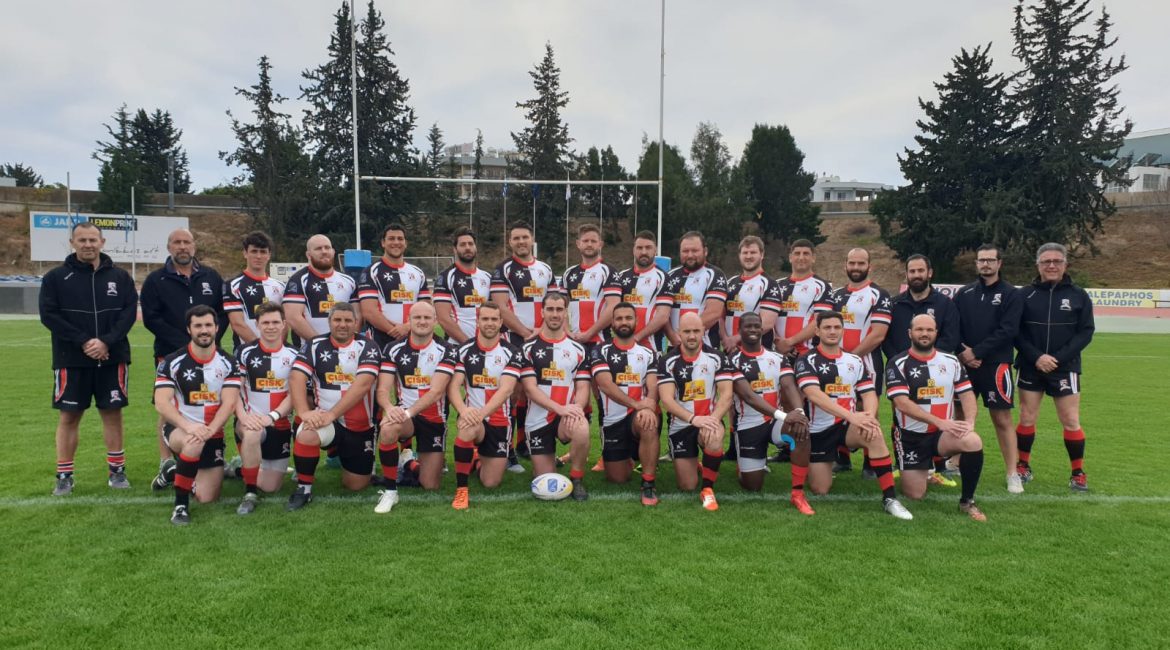 Malta have taken the top spot in the Conference 1 South table in the Rugby Europe International Championship following their away win against Cyprus at the Stelio’s Kyriakides Stadium in Paphos.

The Maltese squad, led by coach Damian Neill was firing on all cylinders straight from the first whistle.  With the team leading 0 – 17 by the end of the first 15 minutes, with James Kirk Penalty opening the score on the 4th minute, followed by two tries by Luke Watts and Chris Dudman, both converted by Kirk. The pace would slow down drastically though, following two injury substitutions in the front row, after both Rhodri Apsee and Daniel Holliday had to leave the game.  The loss of these two powerhouses gave the weight advantage to the Cypriots, who would move on to control the pace and deny the Maltese backs chance at the ball which was kept in successive rucks and mauls. Eventually, the Maltese would gain back control of the match in the final minutes of the half with another unconverted Try from Dudman closing off the half, at 0 – 22.

The second half looked to continue as the first ended, with the Cypriots using their weight in the pack to control the pace of the match, but there would be two more Maltese Tries before the Cypriots could make it onto the scoreboard.  These came from Tom Holloway and Mark Davey, with Davey’s try being converted by Kirk.  Within 5 minutes of this the Cypriots would finally break the Maltese line, with Cristopher Joannou grounding the ball to give Cyprus their first 5 points.  Clearly motivated by this, the Cyprus team would power on to score another 5 points minutes later, by Giovanni Dall-Amico, bringing the score to 10 – 34 with Malta still clear in the lead. Malta would get the last points of the match, with another Kirk penalty finalizing the score at 10-37 in the 62nd minute.  The remainder of the match was very Cyprus’ game, but despite their strong pack and growing momentum, the home team denied themselves further scoring opportunities due to repeated handling errors  which denied them points that could have drastically altered the score.

This result ties Malta with Croatia on points, thanks to the bonus point earned from this win, but Malta’s score difference gives them the top spot.  This leads to a very exciting match on the 13th April when Malta hosts Croatia at Hibernians Stadium for what will be the deciding match for the group.