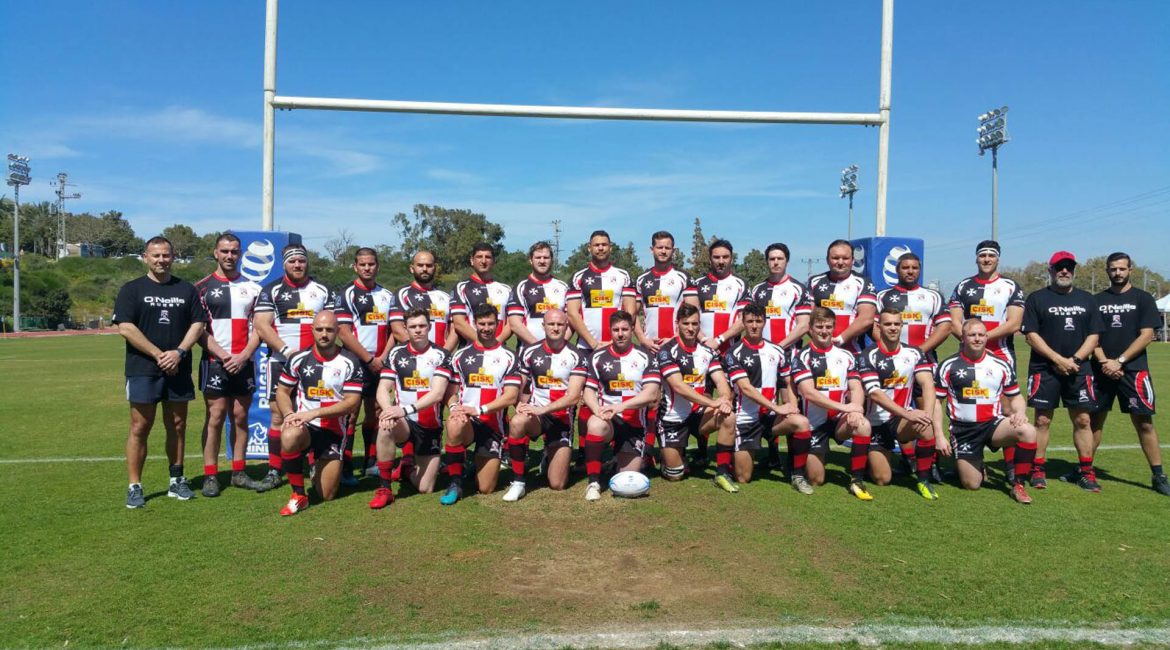 In this Rugby Europe Championship Conference 1 south game, Malta ran out the winners by 21 points to 17. Played in Netanya Israel, these Maltese Crusaders had to withstand a second half onslaught with a desparate Israeli team looking for a win.

In the last encounter that these teams played in, Malta had won by 39 to 17. But this was a different team on their home ground who played with passion, but maybe not as direct as Malta.
It took Malta 15 minutes before they got on the scoreboard, after a period of attacking Rugby, keeping Israel on the back foot, Malta scored through Anthony Harvey(3) from close in, with O’Brien converting Malta had their tails up and in front by 7 to 0.

A yellow card to Luke Watts(7)didn’t help Malta’s cause but Malta withstood the change in momentum with a man down. On Watt’s return he went from zero to hero scoring a try after Rob Holloway had scorched the earth with a weaving run at pace, stepping the Israeli defence beating about 10 players to give Watts his try.

Israel playing against the wind worked their way into the Maltese half on several forays but a combination of Maltese pressure and poor decision making thwarted their efforts.

Against the run of play with Malta attacking through the backs,a wide ball held up the wind and Ori Abutbul(13) intercepted around the half way mark and ran it in to score, he converted his own try to make the half time score Malta 14, Israel 7.

The second half kicked off with Israel mounting a wave of attacks on the Maltese tryline and were finally rewarded with a penalty for an offside by Malta, right in front which Abutbul duly kicked to inch his team closer at 14 to 10.

Malta lost their way a little with a lack of communication between players with isolated runners turning over the ball, but it was soon corrected with the forwards regaining their composure and putting the Israeli’s under pressure on their own line.

From close to a ruck Watts ran hard off a pass from his halfback, running a great line then straightening and going over to score his second try.

With the score at 21 to 10 after the O’Brien conversion, Israel knew they had to score quickly to stay in the game and again Abutbul was the go to man after a period of indiscipline, back chatting the Spanish Referee marching Malta back another 10 metres, with the Israeli backline setting Abutbul up for his try with an inside ball. With his conversion it was Malta 21, Israel 17 and it was still anyone’s game.

Malta went on the attack again working their big forwards up field and after constant pressure Israel conceded a penalty which O’Brien put straight down the middle from 35 metres out.
A big scrum by Malta won them a penalty with the Israeli scrum trying to wheel it sideways illegally, with the kick into touch ending this game, which the work of the Maltese defense won them the day 24 to 17.