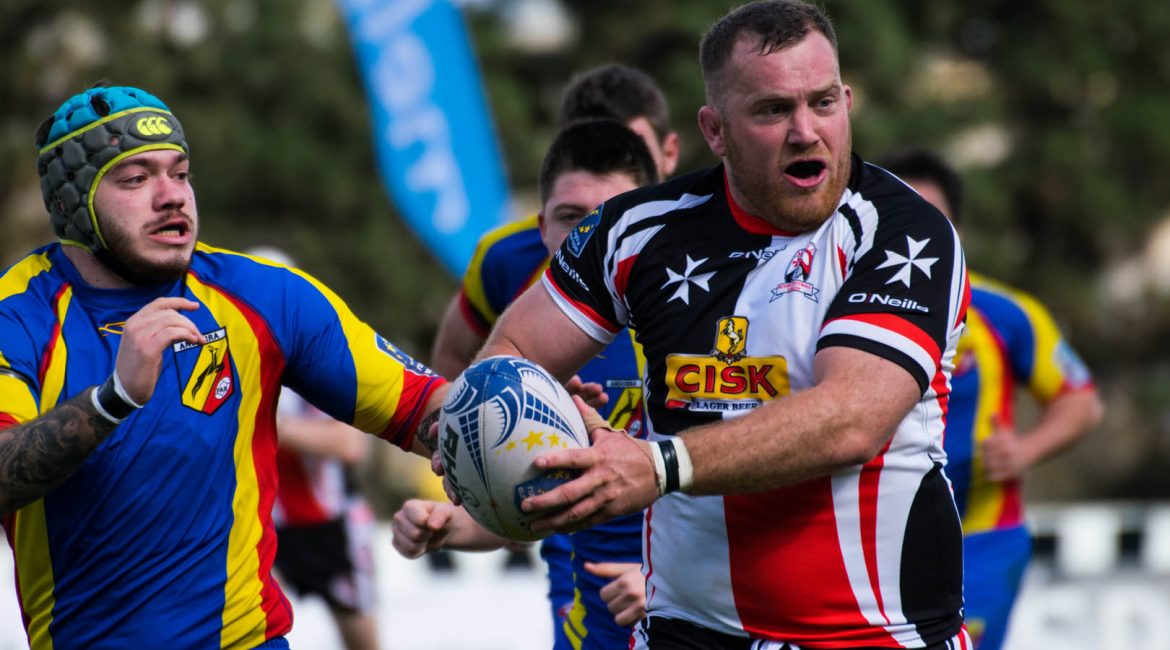 A game that started slowly in the first half, then burst into life in the second stanza as Damian Neill’s men grew in confidence and began to move the ball wide at pace, winning this Conference 1 South game.

Andorra ranked 70 in the world rankings were no match for a team ranked 33 points above them.
For a team who were frequent flyers after their win in Israel last week, became frequent scorers in this exciting game, as Malta unleashed their quick runners out wide, scoring at will, especially in the second half taking the score from a half time 26 to 3 out to 89 points to three when the Czech Referee, Mathew Razga finally blew for full time.

Malta were on the scoreboard within the first minute as they ran from deep with James O’Brien(15) and Robert Holloway(10) not looking to kick but to run, putting Malta into an attacking position for Benjamin Borg(4) to go over.

The Referee warned Andorra for repeated infringements, as they tried to slow Malta’s game down with finally a yellow card being flashed to Fite(10) for a knock down of a Maltese pass as they headed for the line. Daniel Apsee(8) soon scored from a scrum close to the line, O’Brien converting this one.

Andorra were trying to get into the game with their big runners hitting it up Risco(3) and Macedo(4) but the men in red’s defence drove them backwards with Harvey(3) Holliday(2) and Deguara(6) tackling with venom.

The game remained on 12 nil for about 20 minutes as Andorra finally put some phases together, but there was no way through the Malta defence. Rory O’Brien(13) went off with a blood injury and Daniel Apsee was yellow carded for a tip tackle going to the bin for his sin. But while he was off Daniel Holliday scored after Dominic Busutil(12) had crashed it up, then picked up by Rhodri Apsee(1) who offloaded to Holliday.

Just prior to half time Clayton Cassar(5) scored from a pick and go, close to the line and with O’Brien kicking both conversions the half time score was 26 to 3, with just a penalty to Andorra for their effort with Carrington(15) kicking the penalty after the Apsee yellow card.

A few changes at half time with Julian Galea(9) who had his first start going off for Tom Holloway and Cerketa(18) coming on for Borg(4).

In the second half, Malta then unleashed their running game with Rob Holloway(10), James O’Brien(15) and Kirk(14) beginning to show their skills, O’Brien scored twice, then James Kirk another two, but it was debutant Brendan Dalton(23) who fed of their line breaks, running in three tries out on the left wing using his pace and swerve, with O’Brien’s two conversions taking the score out to 55 to 3 at the 20 minute mark.

One of Dalton’s tries was off a Clayton Cassar break that then found Harvey running into space and drawing the last defender, setting up Dalton’s run in to score.

Andorra poured on the reserves to try and stem the tide, but Malta were rampant and running at will with the Holloway brothers dictating the speed and direction of play.

Holloway and O’Brien were also sending down some territory biting kicks, keeping Andorra pinned in their own 22, coupled with the line speed of the Malta backline not giving them anywhere to run.
Watts(7) the go to man in the lineout was winning fast clean ball for his speedy backs, Mathew Spiteri(16) who was putting in some crash tackles, scored off a ruck from a pop pass from scrumhalf Holloway rolling over to dot it down.

Rob Holloway scored a great individual try stepping his way through the Andorra backline and through the forward pack to score under the posts.

Every Maltese substitute got time on the pitch and all acquitted themselves well, not allowing the momentum of the game to slow down. The four tries in the last 10 minutes to Luke Watts(7) and the aforementioned Spiteri and Holloway, with another to Kirk, blew the final score out to 89 to 3 for this spectacle of running Rugby.