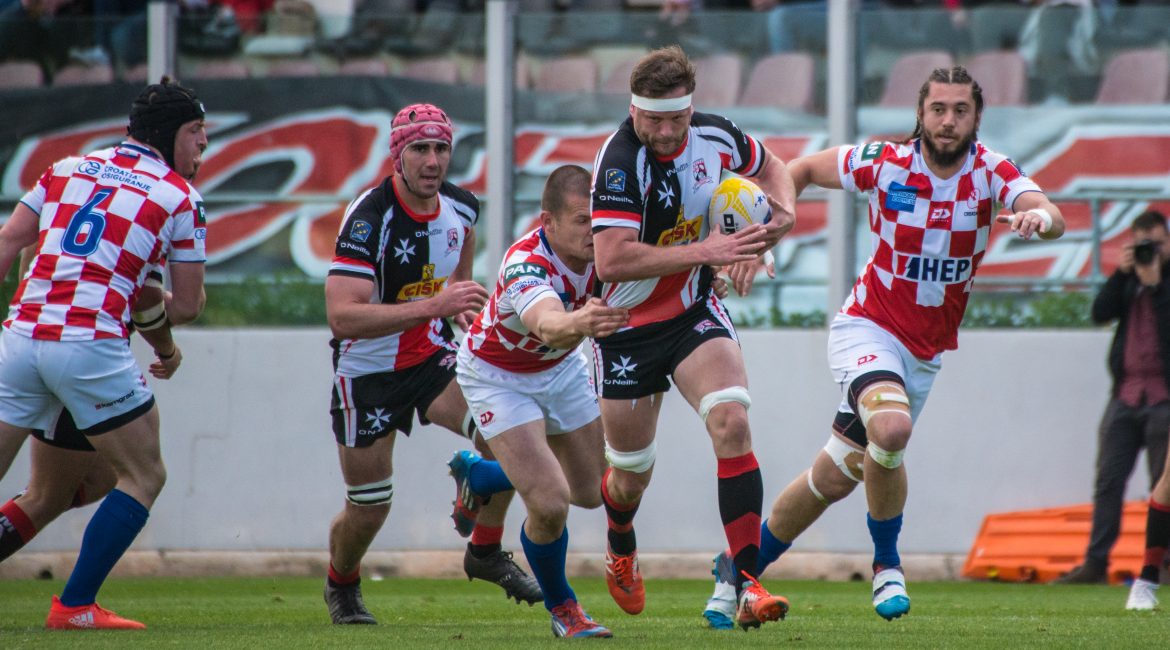 Back from their win in Slovenia, Malta was looking to take advantage of this game to top the group. But it wasn’t to be, as Cyprus threw everything at Malta, to claw back a win by 18 points to 16 in the last few minutes of the game.

Malta started the game playing into the wind and Cyprus took advantage of it, kicking a penalty to get their first points on the board, after Ethan Glass the Scottish born Swiss, Referee penalised Malta for an offside.

But within three minutes Harry Collins(7) scored after a catch and drive from a lineout after a penalty kick into the corner by Dudman(13), the heavily bandaged O’Brien’s(15) conversion was a poor attempt and the kicks after that were taken by Dudman.

The Cypriots played deep into Maltese territory and were unlucky not to score after Holden’s(10) chip kick was picked up, then dropped over the tryline.

Malta were under siege for a good 10 minutes, as the Cypriots threw everything at them, but Malta’s defence was solid.

A dropped high kick at the back bounced into the arms of  Georgiou(12) and he sprinted in to score under the posts for an easy conversion by Holden to take the lead 10 to 5.

Good work by the Maltese forwards with Galdes(3), Stoker(1), Apsee(8) and Davy(5) all carrying strongly, but at times a knock on, a poor pass or a steal by the busy Mladenovich(7) stopped the go forward.

Holden scored his second penalty after  Malta was penalised for offside, using the wind to push the ball between the posts.

But Malta hit back with a few phases with Galdes(3), then Davy(5) carrying over the gainline for then quick ball out to Richard Gum(11) for him to score in the corner to make the half time score  Cyprus 13, Malta 10 with no conversion.

The second half was just 8 minutes on the clock for Dudman to draw the teams level with a great kick from halfway.

Both teams were competing, not giving an inch, as play swung from one end of the field to the other. Cyprus were trying to bring  their big winger Agathokleous(11) into the game and he was running strongly off his flyhalf Holden.

Malta were struggling to hit their jumpers in the lineout at times, turning over good attacking ball to the Cypriots.

The men from Malta seemed to be tiring, as they were caught flat footed in possession behind the gainline, no one was carrying with any ferocity.

Dudman finally put Malta into the lead as he kicked another penalty with the Cypriots not rolling away in the tackle, trying to slow Malta’s quick ball to the backs, just when they were building an attack into the Cypriot’s half.

It was still anyone’s game and a try would win it. A turnover allowed Cyprus to break out of their half with a fine run by the left wing, he was tackled short of the line but Agathokleous(11) picked up and dived over to score in the corner, what turned out to be the inning try.

Malta at that point needed to tighten up their play and get back to their structures, but the restart by Dudman sailed into touch on the full, to give Cyprus an attacking scrum at the halfway.

Malta attacked again in the dying minutes of the game, but another mistake as they ventured into the opposition’s 22, turned the ball over and it was kicked into touch to end the game:

Referee’s Man of the Match: