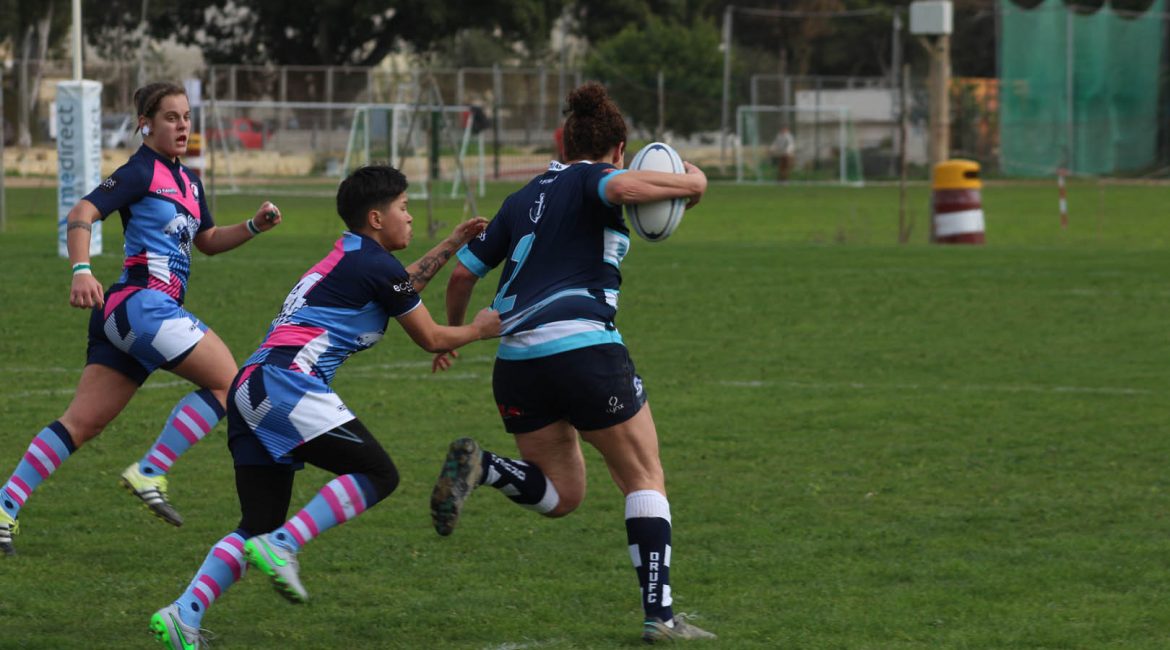 The usual windy conditions were absent at Marsa as Overseas won the toss and elected to receive. From the deep kick off by Kimberley Riolo, Overseas Jasmin Busuttil passed forward, but from the ensuing scrum, the ball was stolen on the Falcons put-in and was shipped along the line to Jacqueline Richard, who carved through a space in the Falcons defence and turned on the gas to run 60 metres and score the opening try for Overseas, leaving a despairing Riolo in her wake. The conversion attempt was missed by Wendy Pace.

Overseas restarted but the kick did not reach the 10 – metre line, and Falcons went on the attack from the free kick, launching a wave of attacks on the Overseas defence spearheaded by Marion Azzopardi. These came to nothing as Falcons were prevented from crossing the gain line, but they were awarded a penalty from a high tackle by Richard. Rodianne Bugeja took a quick tap and go and slipped the ball to Azzopardi, who knocked on as she was brought to ground. Overseas were then awarded a free kick for pre-engagement by Falcons in the scrum and Sarita Cassar powered her way over the halfway line, played a one-two with Loraine Cutajar before releasing Clare Casha who offloaded to Brenda Caruana. She flipped the ball left, but her pass was wayward, eluding the outstretched fingers of Richard. However, the pass went backward and Cassar, backing up, recovered the ball and made a second attempt at finding Richard. This time the pass was good and there was no stopping the Overseas wing, who put in another blistering run to outsprint Riolo for the second time and dot down under the posts.  The try was converted by Vanessa Attard, moving the score to 12-0 in Overseas favour.

Falcons tried to move onto the front foot from the restart, but a promising position from a line-out ended in Bugeja losing the ball and Overseas regained the initiative. They were awarded a penalty for an infringement by Barbra Caruana, but knocked on while playing the advantage and the first half ended with no further score.

The second half started with a deep kick from Pace which was knocked on by Riolo and from the advantage, Overseas pinned Falcons back in their own half. Cassar put in a thunderous run down the right wing, but was hauled down by Lera Cauchi. Falcons tried their best to fight their way into an attacking position, but the Overseas defence was too strong for them, and despite being awarded several penalties, they could not break out of their own half. Finally, the Overseas pressure paid off and they won a penalty when Marion Azzopardi was punished for an illegal tackle. Pace took the tap and Anna Ward recovered a scrappy pass from Justine Bussuti Gaerty and spun the ball left to Richard, who fired down the wing to score her hat trick. Pace converted, and the final whistle saw Overseas take the honours 19-0.