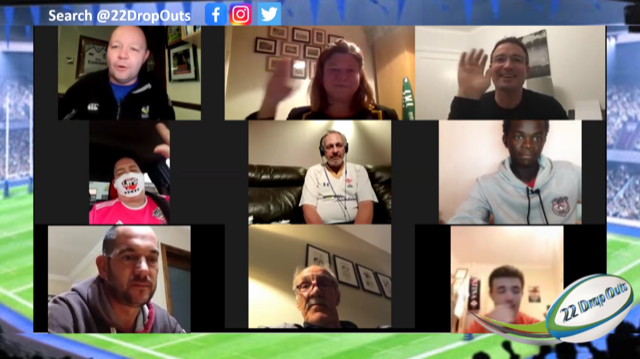 Corona hit the rugby community like a bull looking for a matador in a China shop inside Harrods. This was no different for the referee community, so let us take a look at a little something they have been up to.

Back in March 2020 a group of referees and friends from around the world met up online for a drink. They had so much fun they decided to do a podcast that started as a catch up but evolved into something great. After a little brainstorming, they decided to call it “the 22 DropOuts”, and every Monday evening since, they have recorded and broadcasted 42 shows.

Despite the show containing adult themes, they all agreed that it could never be broadcast on the TV before the watershed.  It is an open and frank look at rugby from a referee’s perspective, “addressing issues such as discipline, instances of foul play, and game management”. However, rest assured that even though some of the guys know a bit about the game as well, it is a show for all audiences that don’t mind the occasional banter and friendly back and forth the guests throw about at each other. Recently, it has cast a spotlight on some of beloved and missed events such as Internationals and the Gallagher Premiership, while delving into rugby’s organization, management, and play in France, India, Malta, Sweden, the US and New Zealand, amongst others.

Being a referee in such a passionate sport is no walk in the park, and with that, the show highlights some of the issues that their referees face, giving a more personal and intimate experience to its listeners.

Their guests, with the episodic famous person joining in such as US 7s coach Mike Friday, talk about going on tour to 7s tournaments as referees and about their time in such an integral position, wedging in discussion about their role as an international referee or even an administrator of the game at the top of World Rugby. This podcast doesn’t focus on just one perspective; however, it also incorporates experiences from international players, leaders in women’s rugby or mixed-ability rugby.

There’s lots of banter between the team, “some might say it goes nuclear quite early”, but they are all great friends, who have forged new relationships during tournaments and visits around the world pre-Covid-19 times.

The very popular expression “Actions speak louder than words” is felt and clearly shown in the charities that the podcast supports, namely CICs, 7s Referee, The Rugby Foundation, Rugby Against Cancer, Oddballs, Doddie Weir Foundation, and the Wasps Legends.

Are they any good?  You be the judge.

Do they have a great time and a laugh keeping everybody’s spirits up?  You bet.

Are they here to stay?  Damn right.