Stompers too Slick for a Battling Kavallieri 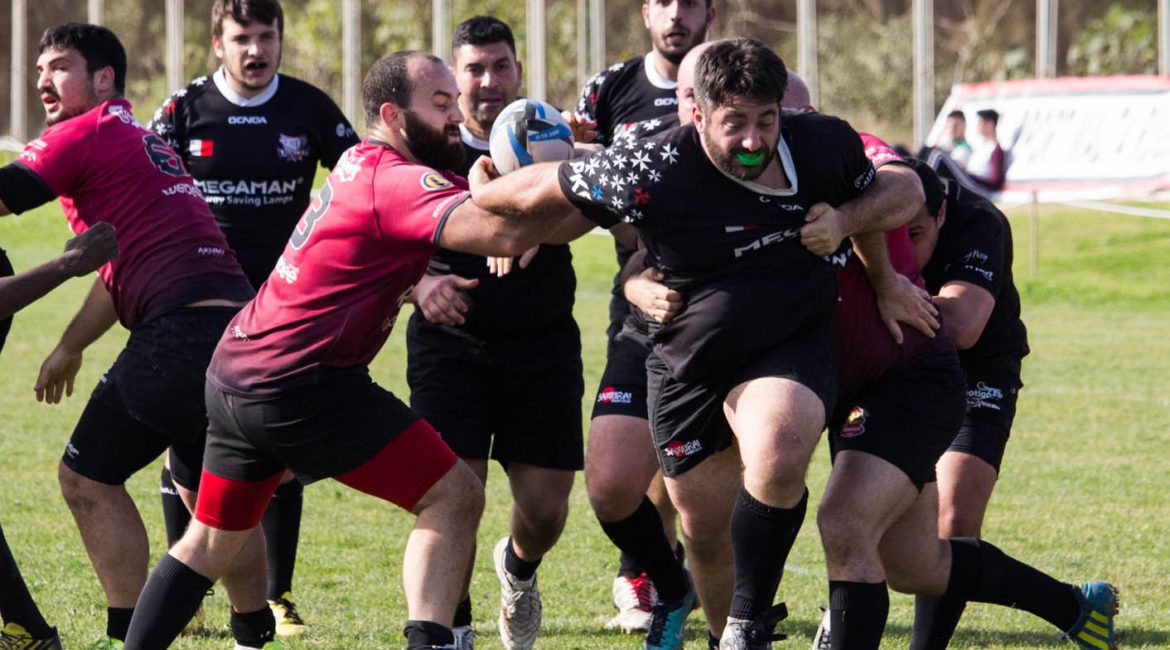 Sliema started this game with a burst, taking the game to a Kavallieri team that was missing a number of players from their last match.

Ryan Sullivan(1) was impressive hitting the defensive wall time and again in those first few minutes as Stompers showed their intent to play a physical, fast paced game.

A few minutes into the game and the strong running of Jeremy Debattista(22) came to the fore as he exploded through the Kavallieri defence, ran 30 metres and then swung the ball out to his winger, Thomas Bugeja(14) to score an unconverted try.
Stompers 5, Kavallieri 0.

Stompers were quick to the tackle disrupting Kavallieri’s game with turnovers or penalties.
Isaac Bezzina(4) having an impressive game was dominating in the lineout and charging around the field making life difficult for the Kavallieri inside backs. Bezzina broke from a scrum and carried strongly brushing off would be tacklers to score another Stomper’s unconverted try to make the score Stompers 10, Kavallieri 0.

Kavallieri were working hard, trying to build some continuity in their play but the Stompers defence kept them at bay. They had their best period of play attacking the Stompers line for about 10 minutes going over the tryline a couple of times, but not being able to ground the ball.
Jake Pace(10) had a great run weaving his way upfield, putting his team into an attacking position, but as he offloaded Richard Gum smashed the ball carrier to stop a certain try.

From a Kavallieri attacking scrum a couple of pick and goes and Josef Borg(5) crashed over to score under the posts, converted by Dalton to bring the score closer at Stompers 10 Kavallieri 7.
Stompers scored again on half time, Kavallieri were penalised for backchatting Referee Da Silva, Gum kicked it long to put his team in an attacking field position, Luke Debattista(8) broke from a scrum weaved his way through the defence and offloaded to Chris Betts(15) who scored, Gum converted and the half time score was Stompers 17 Kavallieri 7.

Stompers started the second half like the first, attacking Kavallieri’s tryline with several forward charges with Cerketta(5) Busutil(2) and Gary Hili(3) smashing the ball over the gailine, Gum ran a at the defence nd sold a dummy, which everyone bought and he went over untouched, with the conversion at 3 minutes of the second half Stompers were 24, Kavallieri 7 but trying hard to catch up.

Kavallieri needed to score fast, but the Stompers’ defence was too organised to let them in.
Bugeja(14) and Dalton(23) for Kavallieri had a good run down the grandstand touchline, but were bundled into touch.

Debiere(11) back from injury for Kavallieri, showed his speed down the touchline, but just when he looked like scoring he was hit from behind.

Gum ripped a ball in the tackle and ran downfield he offloaded to Camilleri(12) running at pace, but a final pass went to ground and Kavallieri scrambled the ball into touch.

From a 22 dropout Gum kicked long and a fast charging Bugeja(14) put the Kavallieri fullback under pressure, Maylor(20) pounced on the loose ball and ran it in to score, with the conversion taking the score out to Stomper 31 Kavallieri 7.
Even a yellow card for Cerketta didn’t slow down the Stompers game and they busted loose downfield with Malcolm Attard(10) running strongly but Dalton tracked him down and took his legs away and the offload was dropped and that’s where the game ended as Referee Lionel Da Silva blew for full time.
Stompers 31, Kavallieri 7.