Stompers too Fast for a Battling Kavallieri 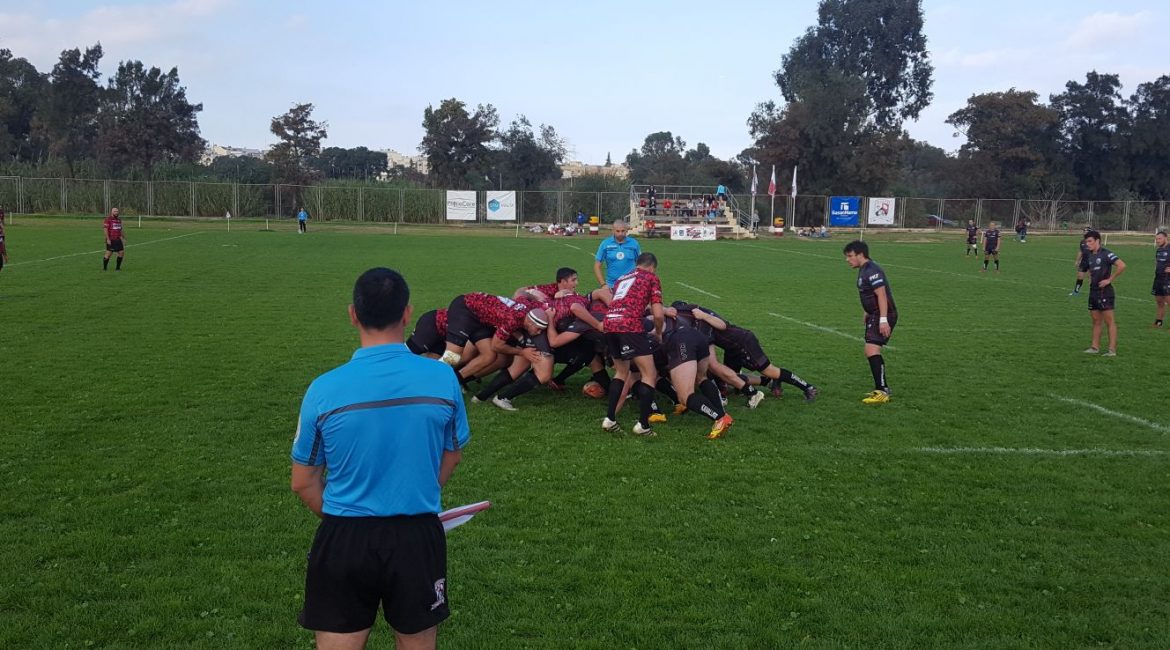 Too many handling errors did not allow this Cisk Lager League game to flow and too much indiscipline by Kavallieri did not allow them to keep the pressure on Stompers Re/Max and build some phases.

Stompers started with their trade mark high speed Rugby from the moment Referee Joseph Cutajar got the game underway, but a Kavallieri rush defence forced dropped passes and wrong options as Stompers tried to get over the gainline.

You have to earn the right to go wide and a team expects their big forwards to get them moving forward, dragging in the spread defence. Finally Jeremy Debattista(23) scored after a number of forward rushes, finishing off with a try in the corner.

Max Galea(9) skipped around a ruck and ran 20 metres to score Stompers second try as gaps began to open up in the Kavallieri defence, Gum(10) converted from right in front to make the score 12 nil to Stompers.

Stompers playing in their new french style strip were trying to open play up but hard tackling by Branton Bonello(5) and the feisty Nathan Zammit(7) disrupted their game plan. Debattista started to receive more ball in his direction and used his speed to outflank the defence to run down the touchline and back under the posts to score a fine individual try after a charge with ball in hand by Isaac Bezzina(6)

Kavallieri worked their way down field and from a drive towards the line Branton Bonello grounded the ball, with the Stompers forwards steamrolled by the Kavallieri pack.

With the score at 19 to 5 finally there was a glimmer of hope for Kavallieri.

But a poor Kavallieri kick from a penalty on their line which failed to find touch, Malcolm Attard(13) plucked the ball out of the air and ran it into the corner to score to frustrate the Kavallieri forwards who had worked so hard to score their last try.

Two quick tries from Stompers using their backs took the score out to 34 to 5 at halftime. First Gum doubled around Attard, he pushed off two weak tackles to score, then another series of hit ups by Cerketta, Hili and Sullivan created space for Attard to offload to Debattista for him to score his hat trick by halftime making the score Stompers 34, Kavallieri 5.

The second half saw the ball swing back to the other wing and Josef Luke Azzopardi(11) scored two tries, first with his speed down the grandstand touchline running 40 metres to score from quick passes through the hands of the Stompers’ backline.

His second try had him fly kick a poor pass in his direction which then wrong footed the Kavallieri defence, he chased his kick 30 metres towards the tryline and the ball bounced up kindly for him to score near the posts.

15 minutes into the second half and Stompers were 44, Kavallieri 5.

Poor discipline throughout the game also punished Kavallieri, as players were sent to the sin bin for high tackles and shoulder charges, at one time they only had 13 players out of 15 on the pitch, allowing Stompers room to move.

Attard(13) scored his second try off a charge from Gary Hili(8) from the base of a scrum towards the line, receiving the ball Attard stepped back inside and scored with a “Hollywood” dive under the posts. Galea(9) converted to make it 51 to 5.

Sandwiched between two further tries by Stompers, Kavallieri managed to get one of their own with quick hands by Brendan Dalton(9) and quick feet by Vuk Strbac(23) who stepped his way to the line.

Nick Formosa(20) had scored for Stompers out wide after some 7s style Rugby moved the ball from side to side, then the strong running of Matt Camilleri(12) ball tucked under his arm, with no intention of passing to anyone, powered his way over to make the final score Stompers 61, Kavallieri 10.