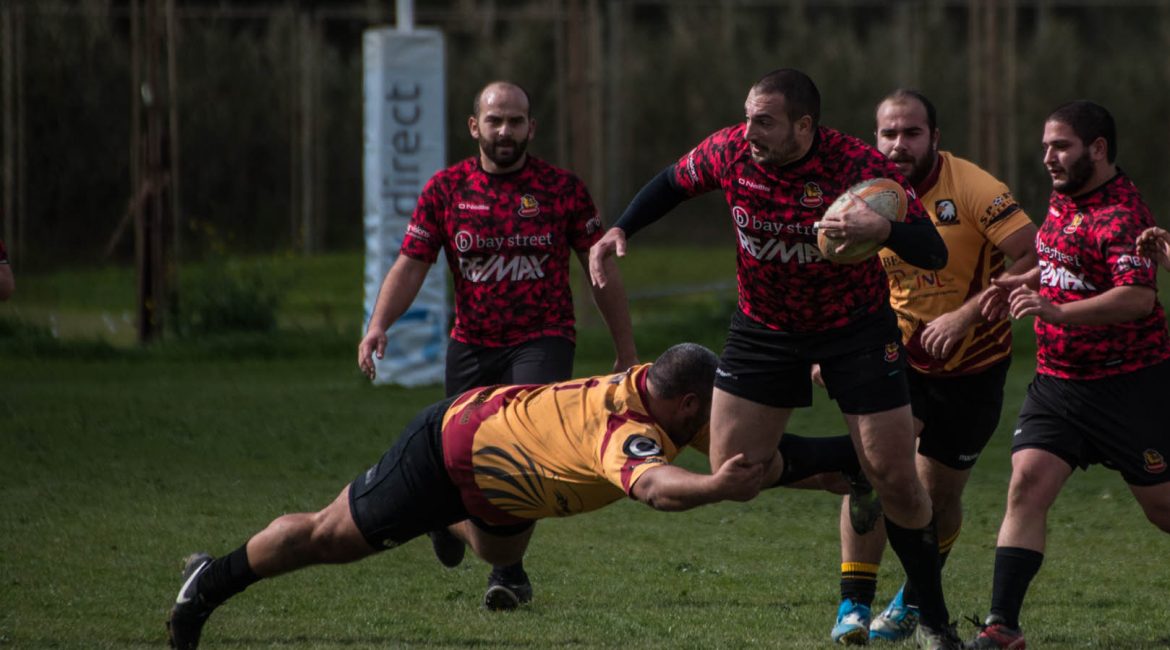 In a game played in swirling winds, Stompers kept the pressure on Falcons to run out victorious by 28 points to 21.

There was a bit of drama in this game with Referee Sam Ramage having to go off injured at half time to be replaced by a Referee who was here officiating at the Women’s Rugby tournament played as a curtain raiser to this game.

Ms Mirea Dykstra from Holland stepped onto the field to help out and controlled the game rather well and with respect from the men!

Both teams were without several injured or suspended players and an early injury to Nikki Maylor(6) disrupted Stomper’s rhythm in the first half.

Patrick Satariano who returned from a few years away from the game, to replace the absent Richard Gum, played with confidence.

Jon Jon Micallef playing centre scored first for Stompers after Malcolm Attard(12) had chipped over the Falcon’s defensive wall and then toed the ball towards to the tryline, for Micallef to score in the corner, a great conversion from Attard went straight down the middle.

Dalton(10) replied with a try, stepping his way through heavy traffic, before speeding away to score under the posts, he converted his own try to bring the score level at 7 each.

Falcons were under a lot of territory pressure, having to defend their line, but finally they broke out into the Stomper’s half and ran Pedrazzi(13) in for a try, taking the lead with Dalton’s conversion.
But Stompers picked up the speed of the game with quick ball from scrumhalf Alexie giving room for Zanin(5) to run into the backline to score, Attard’s fine conversion drew the teams level at halftime 14 all.

Referee Ramage went off and Referee Dykstra wearing the Orange of the Netherlands came on to officiate.

Zanin scored again, using his power to crash over, but it was the work of his forwards Gary Hili(8) and Cerketta(1) who kept his team on the front foot.Another fine conversion by Attard made the score 21 to 14 midway through the second half.

Daniel Holliday(1) went off and losing their player/Coach and inspiration, took the wind out of his team’s sails.

Satariano(10) as slippery as a wet tile, scampered through a gap to score near the posts making Attard’s conversion an easy one now taking the score to 28 to 14.

Falcons kept on trying, but often their quick tap penalties were not allowing them to gain any territory and the quick Stomper’s loose forwards often stole the ball in the tackle.

A defining moment of the game had Falcon’s on attack with Dalton choosing to step back inside close to the line with a three man overlap outside him screaming for the ball.

In the final minutes of the game Ciaran Mullan(21) scored running around his marker and back under the posts for an easy Dalton conversion, their emotion that a comeback was possible with the score now at 28 to 21, was soon deflated with the final whistle.

With this win Stompers have secured their top spot on the league table for the rest of the competition.