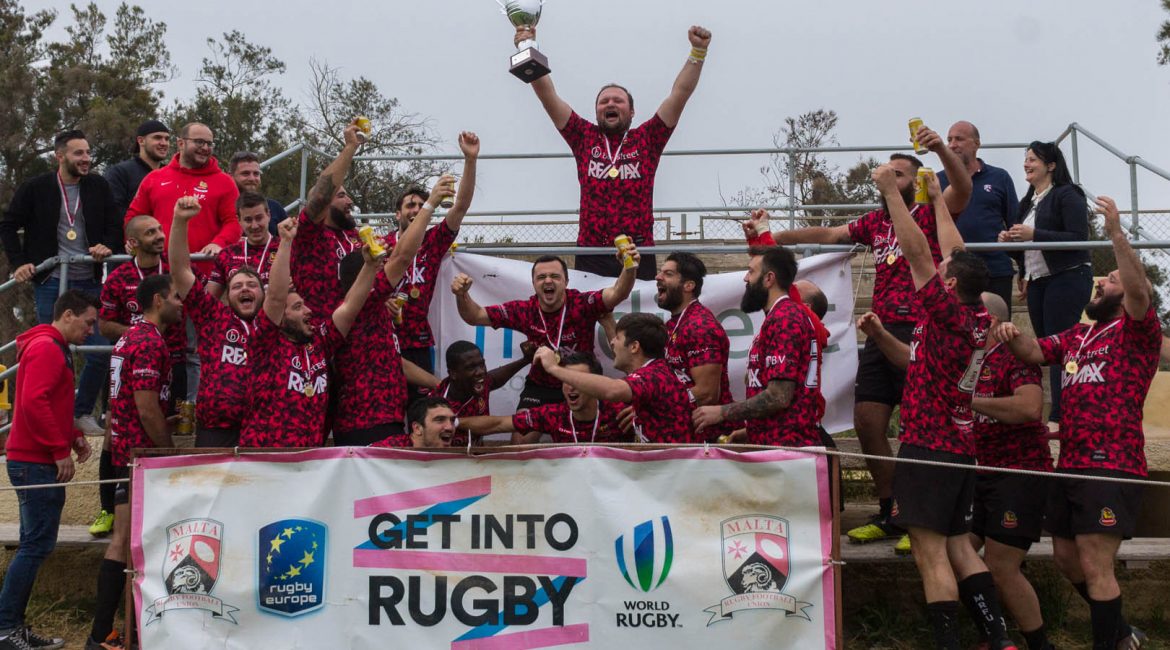 Down at Marsa with gale force winds blowing, Stompers ReMax took on the Overseas Rugby club in the Grand Final.

It was the team that took advantage of the conditions on the day that ran out the winner by 44 points to 15.

It was close at half time with just a score of 12 to 10 in Stomper’s favour.

Overseas had their chances, but failed to use the strong wind at their backs by kicking long, when their backs were against the wall, on their own goal line.

Both teams were trying to play an expansive game, throwing long passes but the wind swirled the ball away from eager hands only to be knocked on, so it was a stop, start affair in the first half.

Referee Joseph Cutajar was trying to let the game flow through playing advantage, but too many mistakes didn’t allow the game to flow for any length of time.

The lineouts weren’t working for Overseas as they worked their way downfield with penalty kicks a combination of tricky winds and Stomper’s Maylor(7) getting in front of their jumpers, thwarted their pressure game on the Stomper’s tryline.

Gum(10) broke from near his own line ran twenty metres and offloaded to Debattista(13) who ran deep into Oversea’s territory and passed to Clement Gruyer(14) who scored the first of his three tries.

Overseas finally realised their lineouts were not working from their penalty kicks and began to tap and go when awarded a penalty. Clayton Cassar(5) scored from such a restart giving new energy to his team. But it was the try by Carmine Fabrizio(3) from a Cerketta(5) offload near the line that sparked Overseas into life and from a massive twenty metre shove on a Stompers put in into the scrum, that won them the penalty that allowed Cassar to crash over.

The Stomper’s forwards lead by Captain Cerketta were crashing it up with Sullivan, Fabrizio and the hard working Hili getting over the gainline and allowing their backs to begin to run.

Another foray into the Stompers half had Anthony Harvey(3) score from another tap and go from a penalty taking the half time score to Stompers 12, Overseas 10.

Stompers now with wind behind them and the experience of Richard Gum(10) at the helm Stompers gave Overseas a lesson on how to reap the wind. Within three minutes Ben Naudi(17) on for the Yellow carded front rower Sullivan, scored but the tricky wind was blowing the conversions all over the place.

Hammond(8), Harvey, Luke Galea(7) and Cassar were trying to get their team back into the game but they just couldn’t break down the Stomper’s defensive wall and the Overseas backline were were flatfooted when they received the ball allowing the Stomper’s rush defence to cut them down.
Referee Cutajar flashed a few yellow cards as ill discipline crept into the game with high tackles, players going off their feet at the rucks and cynical play.

Gum scored in the corner from a quick tap penalty after a scything run downfield taking him close to the tryline and from the penalty he scored.

Gum using his boot and the wind pushed Overseas back inside their 22 and they could extricate themselves from the constant pressure they were under. Hammond ran strongly but lost the ball, Overseas were having to play from too deep and after a few phases still couldn’t score. Gruyer scored his second and third tries on the end of some quick ball from his forwards getting over the gainline, but his speed was lethal close to the line. Taking the score out to 32 to 10.

Cerketta roaming out wide on the wing scored from a backline move with his arms raised up for victory, knowing that there was now no way back for Overseas.

Gaston Perez(22) finally scored for Overseas to restore some pride in his team, crashing over out wide. But it was Richard Gum who had the last say in this MeDirect Cup final, scoring under the posts from broken play as Overseas failed to control a bouncing ball, he converted his try to make the final score Stompers ReMax 44, Overseas 15.