Stompers Edge out Overseas in the Ray Elliot Cup 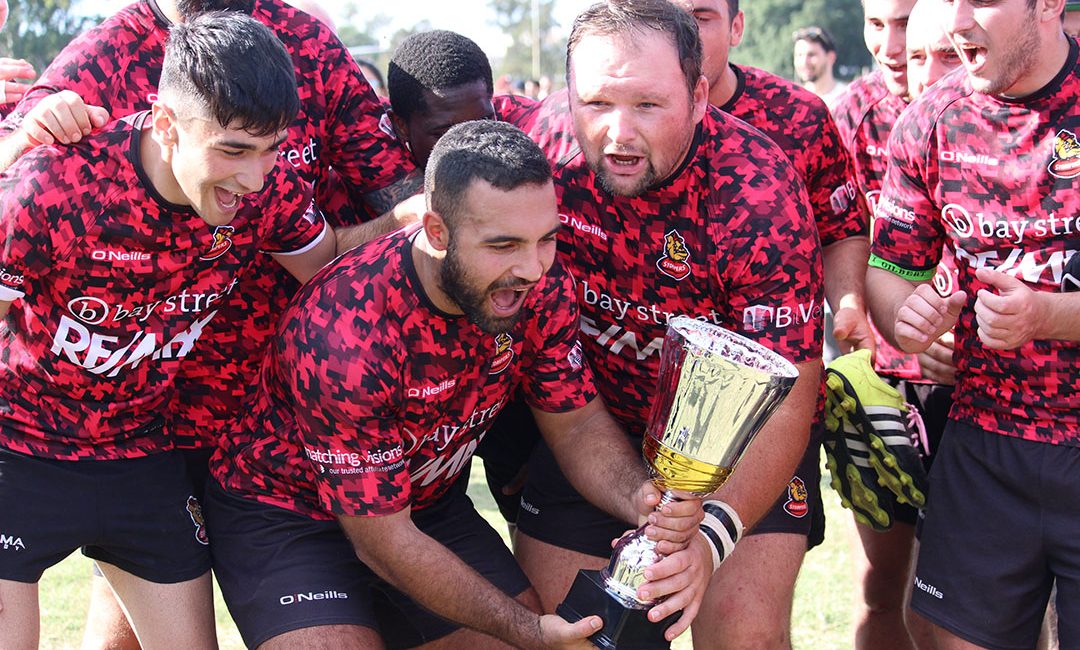 It was the kind of day when we all should have been playing beach Rugby, the sun was shining from a blue sky, with a gentle warm breeze blowing down the pitch.

The Ray Elliot Cup kicked off the new season with last year’s winner of the Cisk League playing against the Runners up, the Overseas Rugby Club, as Stompers took out the both the league and Cup competitions.

It was an emotional game through the 80minutes as it was close throughout, until midway into the second half when Stompers surged ahead, Overseas threatened again in the last 10 minutes but couldn’t finish Stompers off.

The final score was Stompers 21 to Overseas 19.

It was a typical start of the season game with a lot of dropped passes and wrong options taken at times. But the will to win was strong from both sides, although the game didn’t quite flow the way that the crowd hoped for.

A yellow card to Aidan Grech(11) in the fourth minute, didn’t help the Overseas cause as Stompers unleashed a series of attacks at their line with Malcolm Attard(13) and Richard Gum(10) playing front foot Rugby, with Attard breaking down the middle on several runs.

From a tap penalty awarded to Stompers, Matt Camilleri(12) scored his first try using his strength to go over 10 metres in from the corner flag, Gum converted to take the score to 7 nil.
Overseas hit back with Widdop(10) dropping a perfectly placed kick over the onrushing Stomper’s backline for Latterade to run onto,then side step the fullback to score wide out.
Stompers 7 Overseas 7 with the Widdop conversion.

Overseas were penalised a number of times, which allowed Stompers to get close to their line with Avramovic(9) sniping around the rucks and firing out passes to his backs for Camilleri to score his second try under the posts, Gum converted Stompers 14 Overseas 7.

Widdop scored after a chip kick over the forwards bounced kindly for him away from the fullback. With no conversion Overseas were inching closer at 14 to 12.

It stayed that way until midway into the second half with both 10s Gum and Widdop sent to the sin bin for infringements. John Ellul(17) on as a replacement powered his way over under the posts, Gum’s conversion took the score to Stompers 21 Overseas 12.

Stoker(1) had several good runs for Overseas bashing his way down the pitch, Gary Hili(1) was busy up front well supported by Dragan Cerketta(3) for Stompers.

Cameron Brown from Fullback tried to get his Overseas team mates downfield with long kicks and runs, his number 8 Dimitri Dubern had a lively game as did Theo Briffa(13) who scored a good try to get Overseas back within two points of Stompers, with 10 minutes left to play. Referee Lionel Da Silva had to quell some fire with a Yellow and a Red Card to Overseas and Stompers respectively for some play off the ball, which added to the tension at the end of the game, as Overseas stretched Stomper’s defence. Then a big hit by Attard on his opposite number Briffa caused him to drop the ball, with Overseas hot on attack.

Stompers thumped the ball into touch to end the game at 21 to 19 in their favour.

It was a stop start sort of game with not too much flow to it, with a lot of dropped balls from poor passes, as teams tried to build their attack, a bit more patience in attack to build some phases instead of trying to score from first phase, play would have made it a more attractive and orderly game of Rugby.

From the Coaches the Men of the Match were: