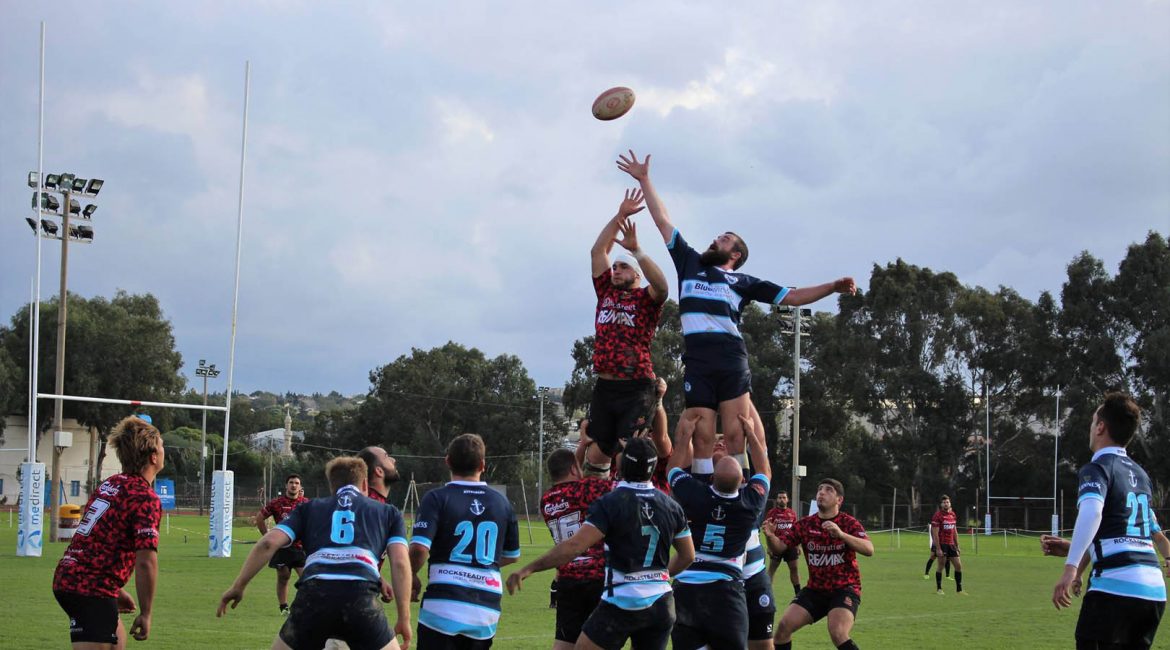 In a well fought competition this Cisk Lager League game went the way of Stompers as they fought back back from a half time 14 to 5 deficit to beat Overseas 27 points to 14.

Overseas had won their last encounter the Ray Elliot Cup in the last minute by 31 to 24, there was a lot of expectations from both teams coming into this game.
The first twenty minutes was to and fro and up and down the pitch with Stompers using the strong breeze to their advantage, but the Overseas rush defence wouldn’t allow them to convert territory into points.

Both teams had players missing from their ranks due to injuries and work commitments, so it took a bit of time for the new combinations to gel. Malcolm Attard(10) in for the injured Richard Gum directed play throughout to keep his team in the game until the final whistle.

But it was Overseas who scored first after a breakout downfield with Latterade(12) and McKenzie(13) running strongly with the final play Briffa(10) giving an inside pass to a flying Roderick Borg(14) who wrong footed the defence to score under the posts, with Briffa’s conversion making it 7 nil, with 20 minutes played.

The fleet footed Overseas’ backs looked good running and stepping with Latterade and McKenzie getting over the gainline and it was the former who scored Overseas’ second try after a surging run by Patinson from the restart, immediately after Borg’s try. At this point playing against the wind, it seemed Overseas would run away with it in the second half.

Referee Sean Doublesin flashed a few yellow cards in the first half, as the players’ indiscipline started to influence the game, not rolling away in the tackle, back chatting the Referee and head high tackles and late tackles, at one point Stompers were down to 13 on the field with Attard and Debattista(13) in the sinbin. But even with a two man advantage Overseas could not build a commanding lead.

From a long penalty kick into the corner by Max Galea(9) Stompers put pressure on the Overseas tryline going through the phases patiently, then finally working the ball to Cerketta(5) who used his strength to shrug off two tacklers down the blindside to score in the corner, making the half time score Overseas 14, Stompers 5.

Overseas kicked off with the strong wind at their backs in the second half and only needed to use it to gain territory and keep Stompers deep in their own half and then score tries.

But something went wrong with the game plan as Stompers began to run at Overseas and opened up their defence out wide. To make matters worse Overseas lost their Captain Harvey(3) to the sin bin for a late tackle and their Number 8 Patinson who was their main lineout jumper, to injury.
Stompers began to gain confidence with Sullivan(2) Hili(8) and the rangy Isaac Bezzina(4) beginning to run freely, opening up the Overseas’ defensive line. Caruana(15) running into the line from Fullback scored out wide to close the gap further to Overseas 14, Stompers 10.

Overseas couldn’t their hands on the ball, they were losing their lineouts, a few scrums went against the head and their replacement scrumhalf Medevielle(21) was robbed of the ball by his opposite number and Briffa couldn’t enough ball to use his boot to get his team down into an attacking position.

Bezzina scored the first of his two tries which was converted by Galea(9), the lanky second rower likes to carry the ball and has good speed and balance, his try was converted by Galea for Stompers to take the lead 17 points to 14, with Overseas trying to get their hands on the ball, but everything was going wrong for them, their lineouts were a mess, their quick taps from penalties had the runner getting isolated and Briffa’s kicks for touch were not deep enough to put pressure on Stompers and three Overseas players were yellow carded in the second half.

Attard scored a fine try to push the lead out further to 22 to 14, after a series of forward and back drives at the line.

Bezzina scored his second try on full time to finish what was a great comeback against the wind for Stompers, making the final score 27 to 14.