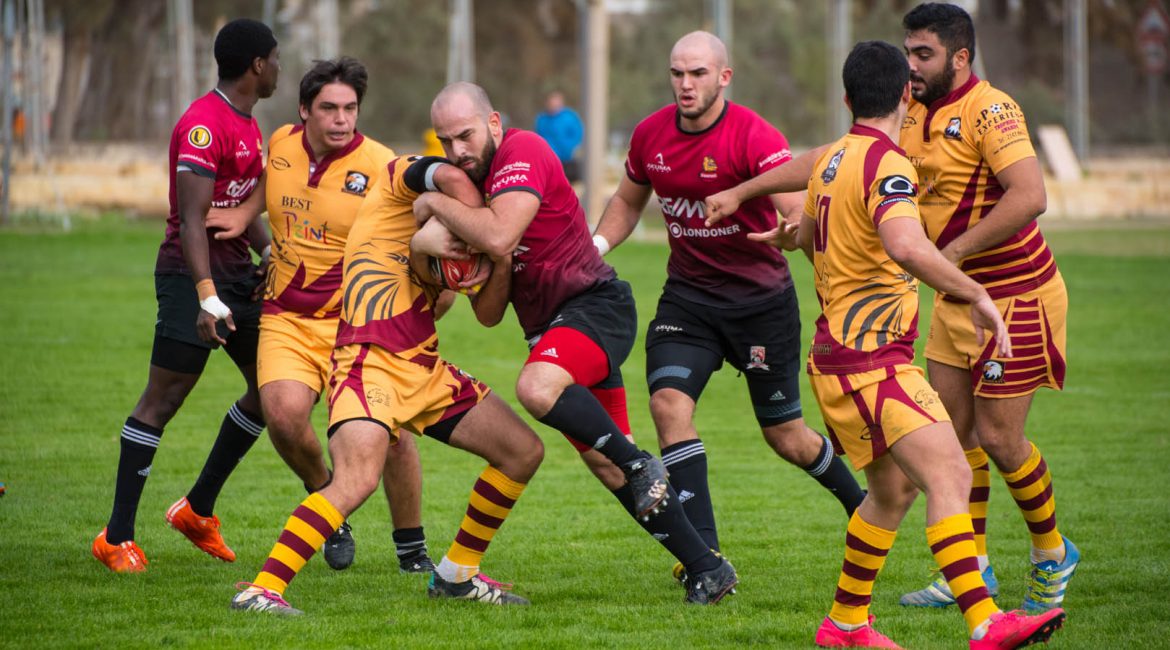 In a game that the score went backwards and forwards throughout the 80 minutes, a last minute penalty goal won the day for the Falcons 27 to 26.

Both Stompers and Falcons like to play ball in hand Rugby and chance their arm with wide balls finding their fast and strong runners out on the flanks.
With both scrum halves Julian Galea for Falcons and Max Galea for Stompers looking to play quick wide ball we knew we were in for a spectacle of Rugby and so it was, that on five minutes Falcons worked the ball to their winger Vinnie Cost-Critien(14) who flashed down the sideline to score in the corner to open the scoring. Julian Galea(9) drilled the conversion from the sideline to make the score 7 to 0 for Falcons.

Stompers took the game to Falcons using their forwards, crashing the ball over the gainline and then out through the hands to a strong running Jeremy Debattista(12) who straightened the attack and powered his way over under the posts, with the conversion by Gum(10) bringing the scores level at 7 each.

Stompers in the first half seemed to have all the possession and territory and kept the Falcons under pressure, but to be fair the Falcons defence was committed, throwing their bodies into the tackles.

For Stompers, the Debattista brothers Luke(12) and Jeremy(13) were straightening the attacks and getting over the gainline,but at times couldn’t link to their support runners.
Gum(10) was directing the Stompers attack going wide or back into his forwards, but it was the quickfire service of Max Galea(9) that was allowing him the room to move.

Around the twenty minute mark Luke Debattista(12) stepped and spun his way through a couple of tackles to score a converted try by Gum(10) to make it 14 to 7 for Stompers.
Falcons were doing their best to get into the game, but some dropped passes didn’t help their cause and the Stompers defence was resolute.

The strong running of Dragan Cerketta(4) created the next try for Stompers as he crashed over out wide to score his teams’ third try in a period of 20 minutes, to push the score out to 19 to 7 with the conversion attempt wide.

In the last minute of the half the Falcons moved the ball through the hands with Aaron Borg(13) straightening the attack and setting up a try for Jxan Pier-Zarb(15) who powered his way over in the corner for an unconverted try and that’s where Referee Sam Ramage blew for half time with the score at 19 to 12 in Stompers favour.

Falcons started the second half into the wind, but with some wind in their sails after clawing their way back into the game.

Aaron Borg(13) who had the task of keeping the two Debattista brothers quiet, began to direct play out wide and within 5 minutes had scored the first of his two tries in the second half, inching his team closer, Stompers 19 Falcons 17.
Falcons were kicking for territory forcing Stompers to defend their line with a stout defence, but once again Aaron Borg(13) ran it out wide and back in towards the posts to score a converted try to take the lead 24 to 19.

Stompers threw everything at the Falcons with forwards and backs handling, working their way towards the Falcon’s tryline and down the left, out wide Gum(10) broke through to run around under the posts to score, converting the try himself, to take the lead 26 to 24.

Falcons had a player yellow carded but with 14 players they got back into the Stompers half and won a penalty 40 metres out, but straight in front. Up stepped Julian Galea(9) to put it straight down the middle and with Ramage blowing for full time, it was time for Falcons to celebrate their last minute win, 27 to 26.
Falcons Man of the Match: Aaron Borg(13) for Stompers: Max Galea(9)