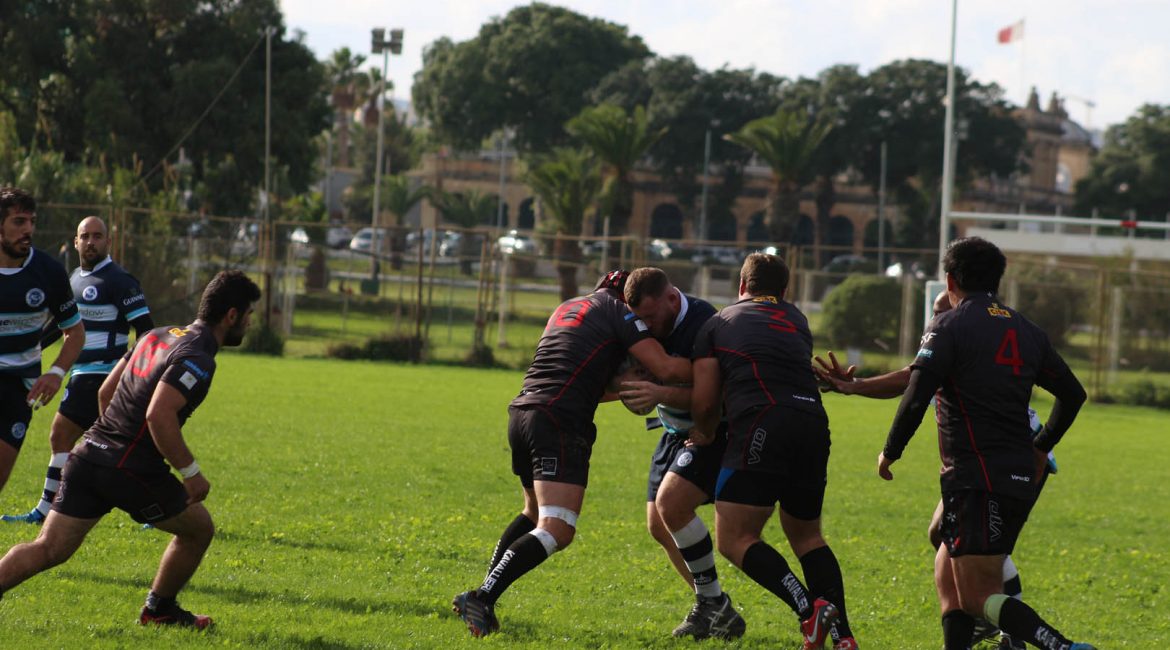 With the Malta International games taking precedence and then a rained out Saturday last week, Rugby hadn’t been played at Marsa for a month. So both Kavallieri and Overseas were chomping at the bit, wanting to get their hands on the ball and play some “Rugger”.
The game promised a lot and there were patches of Rugby that would even convert the non-believer, that Rugby can be a free flowing game, but it was a stop, start sort of game.
Overseas started off into the wind and looked as if they were going to run away with the game as their big forwards and fleet footed backs combined to score two converted tries within fifteen minutes.

The ill-discipline by Kavallieri didn’t help their cause either, as three yellow cards were flashed by Czechoslovakian Referee Vaclav Herman who was visiting Malta on a Referee exchange with Maltese Referee Da Silva having Refereed in his country last weekend.
The last time these two teams had met in the Cisk Lager League, Overseas had raced away to a fifty point win.

Much was expected from Overseas, but a new look backline didn’t quite gel, with some wayward passes thrown and wrong options taken in the heat of the battle.
Anthony Harvey(3) back from his National team duties, scored the first try under the posts after an Overseas forward drive, with Clayton Cassar(8) running strongly, which was then converted by Christian Briffa(10).

Yellow cards went to Andrei Longo(3) on six minutes, for repeated offside, Darren Edmunds(10) on ten minutes for a shoulder charge in a tackle and then on eighteen minutes Andrei Sapojnikov(1) for not retiring ten metres for a penalty. So most of the first half Kavallieri were playing with gaps in their ranks.

Luke Sheehan(6) scored for Overseas after a lineout in the corner, a quick ball through the hands from a ruck, then with Harvey offloading for Sheehan to score the converted try, with Briffa adding the extras. Overseas were looking good at 14 to 0.

But Kavallieri did well to hold on and fight their way upfield with Edmunds putting a couple of long penalty kicks into the corner for lineouts.
Quick ball from a turnover in the tackle had Edmunds running and passing to Dalton(11) stepping down the touchline and back around under the posts to score their first try and with the Chris Zahra conversion, Kavallieri were back in the game at 14 to 7.

Two kick offs by Briffa that did not go the 10 metres had Kavallieri scrumming on the half way and attacking again and from a short throw in at a lineout, Sapojnikov(1) charged over to score in the corner. Overseas’ mistakes had opened the door again for Kavallieri .
That took the half time score to Overseas 14, Kavallieri 12.

Overseas kicked off the second half with the wind behind them and the voice of their Coach Gareth Corcoran in their ears, telling them to play to the game plan and to cut out the mistakes!
Too many times promising Overseas moves fizzled out as the forwards ran the ball away from their backline, back inside to Kavallieri’s strength, or tried to offload in the tackle instead of quick ball going wide.

Edmunds was kicking high balls, trying to get his pack going forward, but Clayton Cassar’s ball handling was perfect, taking the ball going backwards, then charging back over the advantage line.
He scored running wide, after Brandon Busutil(22) and Chris Borg(11) had linked going right, then with quick ball through the hands, finding Cassar charging forward to score.
Harvey scored another, with his forwards shunting him over from a catch and drive from a lineout,
Taking the score out to 26 to 12 with just one Briffa conversion from the two tries.

Again it seemed that Overseas would run away with it, but Kavallieri were still battling and from a arcing kick for his winger from Edmunds, Debierre realised he couldn’t catch it, so he toed the ball back infield to Bedarhan(15) who raced onto it and ran 20 metres to score, Zahra’s kick from in front bounced off the crossbar to make the score Overseas 26, Kavallieri 17.

A moment of madness saw Edmunds get a second yellow card, which then became a red, for a tackle off the ball. From the resulting penalty Briffa sent the ball 40 metres through the uprights to make the final score Overseas 29, Kavallieri 17.
Men of the Match: Overseas: Clayton Cassar (8), Kavallieri: Fajak Hanan Bedarhan(15).