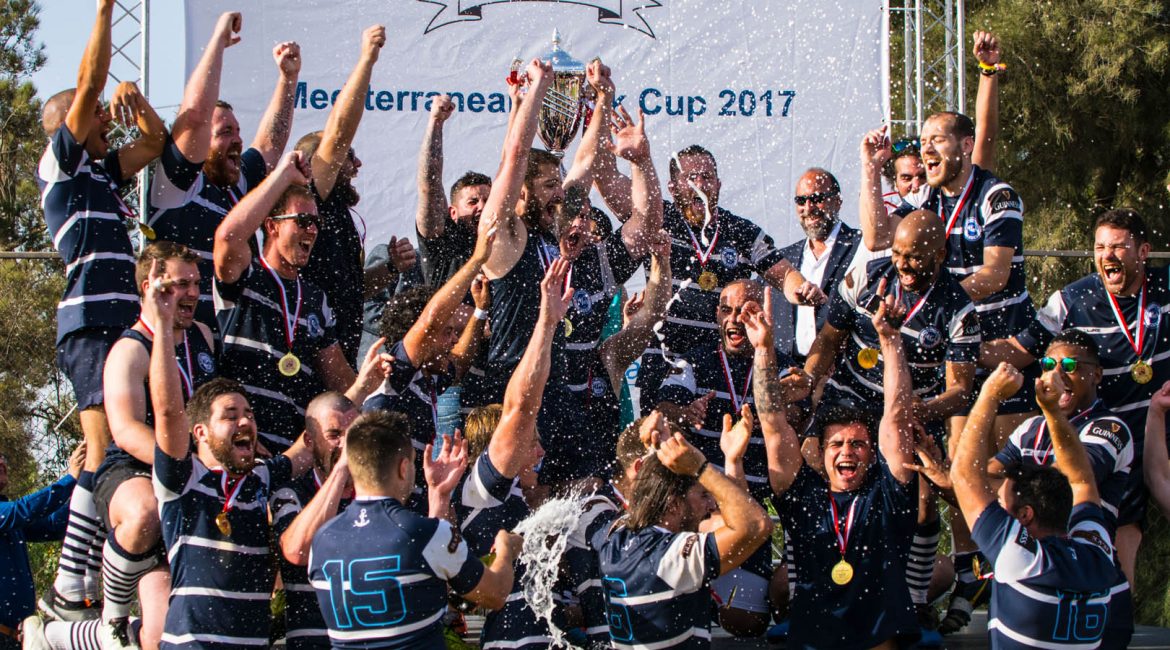 In a game that swung from one end of the field to the other, Overseas won the game in the last minutes to take the Final by 30 points to 29.
Overseas started the game at express speed with their big forwards Matt Stoker(1) and Matty Jones(3) crashing into the Stomper’s defensive wall, but it stood firm.
Overseas were not protecting the tackle area and Maylor(7)and Cerketta(4) forced some turnover ball, McLister ran it 30 metres into the Oversea’s half with Dudman(13) finally pulling him down, but the off load found Richard Gum(11) who broke down the touchline to score Stomper’s first points.
Gum converted his own try to make it Stompers 7, Overseas 0.

Sarres(12) for Overseas was gliding out wide, but was hit with a head high tackle by Jeremy Debattista, The Swiss Referee, Yann Benoit sent him to the sin bin for 10 minutes.
Dudman kicked the penalty into the corner and and from the lineout Harvey scored, breaking from the maul.
Overseas were putting a lot of pressure on Stompers as they tried to get over the gainline, their rush defence shutting down the red team’s options. A Stomper’s passing movement broke down around the half way mark, with the ball going to ground, Sarres(12) swooped and kicked it through, it bounced into his hands he juggled it and went over to score in a tackle. In five minutes Overseas had scored twice taking the score out to Overseas 10, Stompers 7.

Dudman kicked a penalty adding another 3 points. Overseas 13, Stompers 7.
Isaac Bezzina was winning good ball for Stompers in the lineout allowing his backs some front foot ball with Betts beginning to run into the line from Fullback. But it was a head high tackle by McLister(10) putting him in the sin bin, that made his team step up and go on the attack, putting Betts in near the corner when Gum saw the mismatch of Overseas forwards against the speed and flair of the Stomper’s backline.
Overseas 13, Stompers 12.

Overseas lifted their game and attacked with Dudman(12) running a straight line bumping off tacklers to score, converting the try himself it was at half time Overseas 20, Stompers 12.
The second half opened with Stompers putting together a number of phases, with Cerketta, Gatt(2) and Hili(3) on the charge giving their backs room to move and Betts in the line again scored out wide an unconverted try.
Overseas 20, Stompers 17, but hot on their heels.

Gum stepped his way downfield but with the fullback to beat Cameron Brown(15) wrapped him up in a tackle. From a penalty awarded to Stompers a quick tap and go put Cerketta in for a try, he’s a hard man to stop close to the tryline. Stompers 22, Overseas 17.

Overseas were looking tired and Hepburn blasted a kick 70 metres into touch, forcing them to trudge back to near their own line. From the lineout McLister broke and offloaded to Pace-Moore(6) running a good line and he scored a try converted by Gum.
Stompers 29, Overseas 20.

Dudman kicked a penalty kick 50 metres downfield into the corner and from the lineout, a catch and drive had Harvey(3)scoring near the corner, his second try.
Stompers 29, Overseas 25, but inching closer.

Clayton Cassar(8) went blind from a scrum, but was forced into touch near the line, some ill discipline by Stompers had the Referee talking to Captain Matt Camilleri, the pressure was on Stompers on their throw in to the lineout, it bounced away from their jumpers and went to Corcoran(10) who ran it straight through would be tacklers to score.
Overseas 30, Stompers 29.

In the final minutes Stompers attacked and were awarded a scrum, but a “Monster” scrum by the Oversea’s forward pack won them a penalty and the kick into touch won them this exciting Mediterranean Bank Cup Final. 30 points to 29.