Overseas Wear Down Falcons to Win 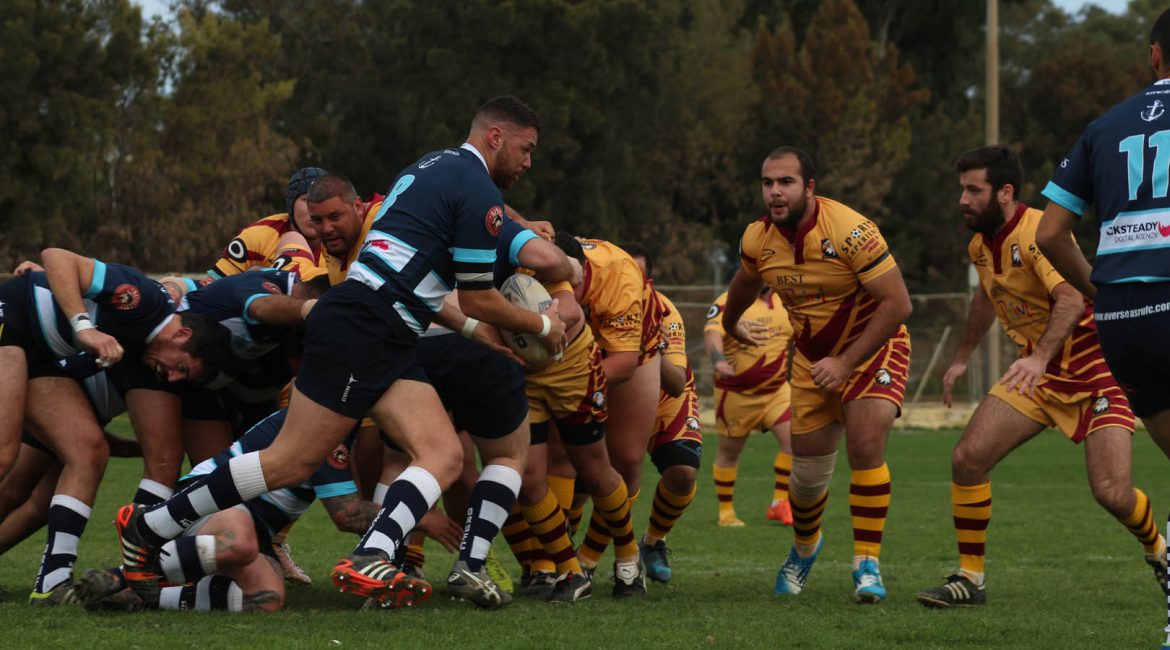 This Cisk Lager League match between the 2nd and 3rd placed teams in the competition, did not reach any great heights as a spectacle, but it was competitive throughout as both teams bashed away at each other.

Visiting Referee from Toulouse Patrick Domenc got the game under way down at Marsa, in perfect conditions with a slight breeze favouring Falcons in the first half.

Overseas had a lot of the attacking play in the first 25 minutes, but so often they failed to convert territory into points, as the Falcon’s defence kept them under pressure and forced them into errors and many a dropped ball, with the line open. Luke Galea(7)and Andrew Schembri(5) and later Postma when he came on, were providing them enough ball in the lineouts for them to do the job.

Clayton Cassar(8) was back for this match and it was he who scored the first try for Overseas, from a scrum near the line he picked up at the back and forced his way over, midway between the posts and touchline, Aiden Grech’s conversion brushed the uprights on the outside.
Midway into the first half, finally Falcons put a series of plays together in the forwards, to provide Jxan Pierre Zarb with quick ball for him to straighten his run and score a converted try with Bjorn Micallef(9) adding the extras. Taking the lead 12 to 7.

A lot more was expected from Overseas after their loss to Stompers last week, I expected them to come out firing, with a point to prove, but they appeared a bit flat.
Daniel Holliday(2) was once again leading his team from the front, popping up in the backs and driving in the forwards, he scored the next try after a period of Falcon’s pressure on the Overseas tryline, making the half time score Falcons 12, Overseas 5.

The wind picked up in the second half and was there for the taking, but once again there were no long kicks for territory or up and unders to create pressure, instead the ball was shovelled sideways through the hands, but finally Rhodri McKenzie(13) and Gaston Perez(12) began to play front foot Rugby with now Cameron Brown(15) dropping into the playmaker role at flyhalf.

But it was the work of Taber Hammond(6) who impressed, moving back to Number 8 when Cassar went off injured, his ball carrying and big tackles kept his team in the game.
It was he that scored the first try in the second half running hard off a ruck, but Grech missed the conversion to make the score 12 to 10 to Falcons.
Then in a 5 minute period of play the game swung dramatically in Overseas’ direction as first they
worked the ball to their right winger Chris Borg(11) and he used his pace to tip toe down the touchline to score wide out an unconverted try, to take his team into the lead at 15-12.

Then from the kick off, the try of the match was scored by Perez(12), initially from another blazing run by Chris Borg down the touchline, flipping the ball inside to Perez, then again to Cameron Brown on his shoulder then back to Perez to score under the posts, in a play that had swept 75 metres down the pitch, Grech converted and Overseas were out to 22 points to 12.

Sean Gregory(13) scored for Falcons, a try in the corner, after some busy work by Bjorn Micallef(9) to make the last five minutes of the game a tense affair for the Overseas players and supporters, as an inspired Falcons team threw everything at the line to clinch a win.
But finally Falcons ran out of time, as a poor decision from a lineout, after a Luke Cutajar(14) run down the sideline was pushed into touch. From that lineout Overseas won the ball and a penalty, with Captain Anthony Harvey putting the ball into touch to end this game,Overseas 22, Falcons 17.