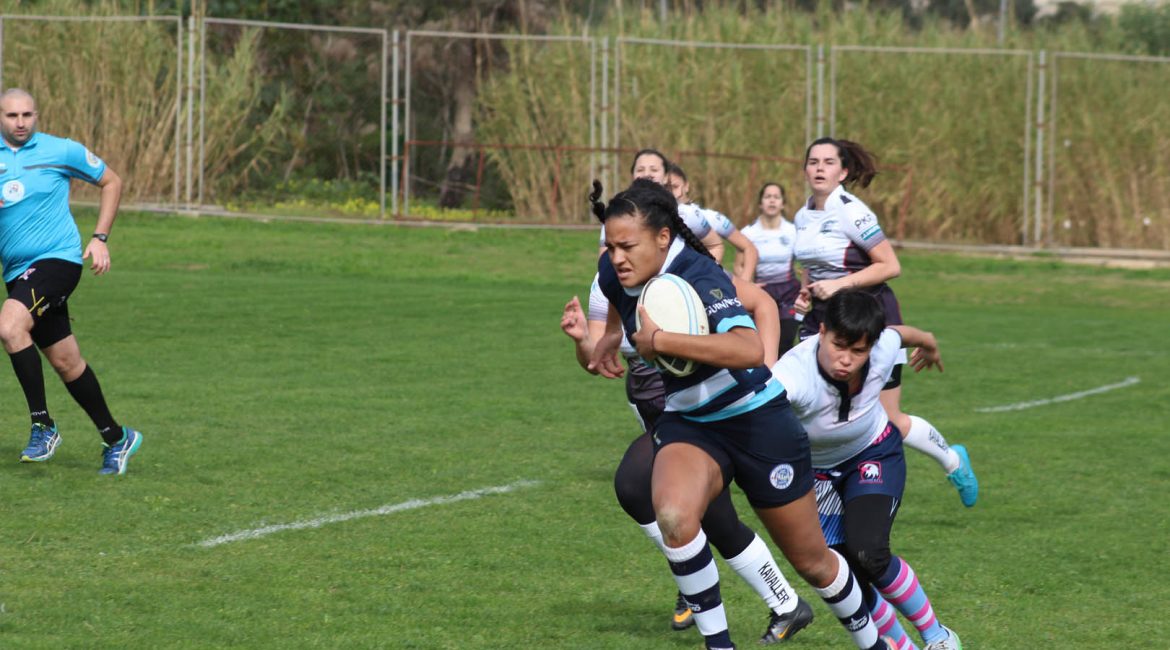 With Overseas fielding a big squad of experienced players, it was always going to be a tough call for a Kavallieri team trying to rebuild a new squad, and so it proved to be. Kavallieri knocked on from the kick-off and Overseas won the ensuing scrum, but then knocked on themselves. However, they stole the ball back on the Overseas put-in and Anna Ward slipped a nice pass to Jacqueline Richard.  The speedster needed no further encouragement as she flew down the left wing and dotted down under the posts to open the scoring. Wendy Pace missed the conversion.

Kavallieri tried their best to run the ball out of their own half with carries by Alina Nesu and Justine Zammit, but were tied up by the strong Overseas defence and eventually knocked the ball forward under pressure. Overseas dropped the ball on their next move. They recovered possession and kicked forward to Kavallieri’s Myra Bonello, who chose the wrong option and booted the ball over her team mates and into the grateful arms of Richard, who sprinted down the left again to score her second. Again, Pace was unsuccessful with the conversion attempt to leave the score at 10-0.

From the restart, Kavallieri again tried to breach the Overseas wall with another strong run from Zammit, but she was forced to spill the ball and handed it on a plate to Overseas, who swung the play left and Claire Casha picked out Sarita Cassar on the charge. She was never going to be stopped as she powered over for the points. Pace missed her third conversion attempt and the half time whistle blew with Overseas 15 points to the good.

The second half brought more of the same punishment for Kavallieri as their high kick-off was taken cleanly by Loraine Cutajar. The ball was then slipped sweetly along the line through the hands of three players before Brenda Caruana found Richard lurking on the left touchline. She scorched 50 metres down the wing before cutting inside to bamboozle the chasing Bonello before touching down for her second hat-trick in two weeks. The text book try was converted by Pace and the gap widened to 22 points.

Minutes later, a similar move was brought back for an offside penalty when Richard was again on the receiving end of a backline move. The Kavallieri attack from the tap was halted by a couple of big hits in midfield. A second penalty infringement for a high tackle gave Kavallieri another shot at leaving their own half, but the ball was stripped from Francesca Schembri and turned over by Overseas, leaving Caruana to cut through the midfield and plant the ball over the try line, chased all the way by Bonello. Pace missed the conversion.

The final try of the day came from a Kavallieri scrum on their own 22-metre line which went horribly wrong as Schembri allowed Pace to steal the ball from her. Pace made the initial break before offloading to Justine Busitti Gaerty, who showed her strength as she broke through two tacklers to score. The kick was missed and the game, which had been played almost completely in Kavallieri’s own half, ended 32-0 to Overseas.