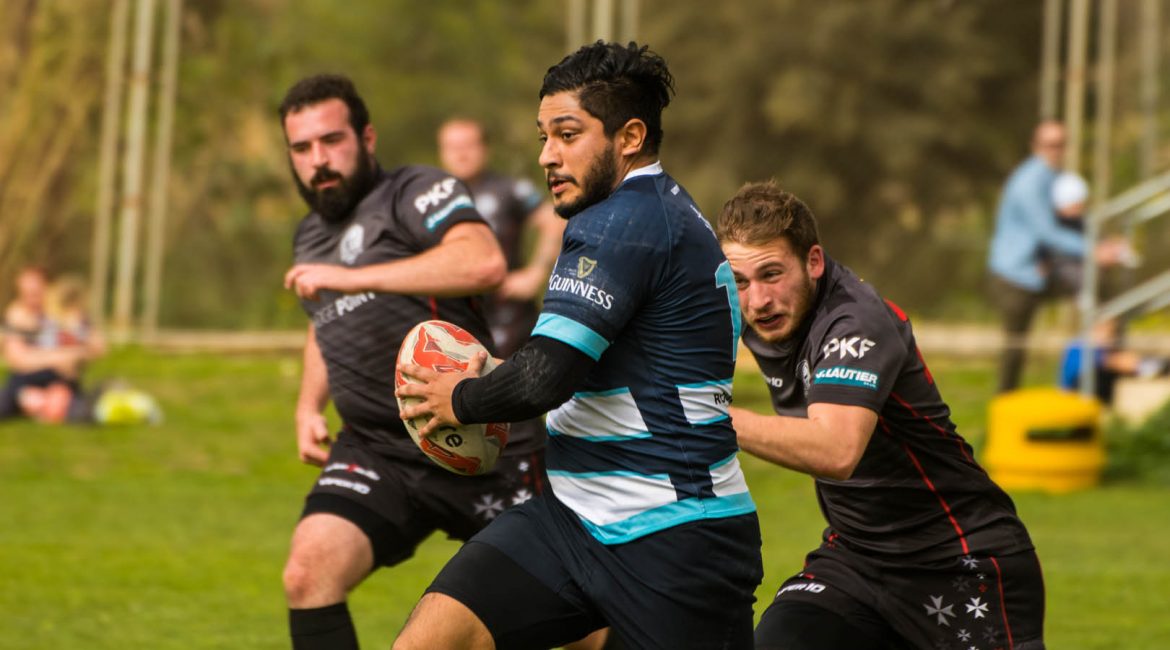 This Cisk Lager League game was almost seen as a forgone conclusion determined by past results, where the Boys in Blue had won the previous encounters handsomely.
Which seemed to be reinforced as Overseas scored within the first minute, when Cameron Brown(15) ran back a Kavallieri clearing kick straight up the middle, brushing off would be tacklers, to score under the posts for Aidan Grech(10) to convert.

Kavallieri looked intimidated and lacking in confidence, but gradually they gathered a head of steam and played some positive Rugby to put pressure on a now over confident Overseas team.
It took Kavallieri 12 minutes to find their feet, work their way into Overseas’ territory where Branton Bonello(5) bashed his way over from close, scoring an unconverted try to keep Overseas honest and forewarned, that it wasn’t going to be a one sided contest.

Overseas stepped up a gear and Perez(13) scored after Brown slotted into the playmaker role and ran hard offloading to Gauci(11) and then on to Perez who straightened to score an unconverted try.

Dalton who was linking well with his halfback Sammy Gichane, scored the next Kavallieri try with some individual brilliance, stripping the Overseas’ ball in a tackle, then used his pace to run wide from 50 metres out and around to score in from the touchline.

Play then see sawed with Perez scoring again from a burst by Matt Stoker(3) up the middle winning a penalty, Anthony Harvey tapped quickly and ran right, looping the ball into the hands of a flying Perez with the score going out to Overseas 19 to Kavallieri’s 10 with the conversion.

A Yellow card by Referee Joseph Cutajar for killing the ball in the red zone, put Tobias Dickinson(6) into the sin bin for 10 minutes.
Kavallieri took advantage of the penalty and the overlap, when Nicholai Grech(4) bashed his way through the Overseas’ forwards to score, with the conversion, Kavallieri were on the comeback and were putting Overseas under a lot of pressure, with the score at 19 to 17 in favour of Overseas.
Kavallieri finished the half on a high with Jean Pierre Zarb(8) bashing his way through two defenders to score to take the lead with Dalton’s conversion at Kavallieri 24 Overseas 19.

The game got more exciting as the second half began with both teams intent on winning, subs came on and the fresh legs lifted the game when Christie Gilmartin(22) scored for Kavallieri in the corner after another run from Gichane and Dalton, to leap out to a 10 point lead at 29 to 19.

Simon Vella(16) scored for Overseas after good control by the Overseas forwards bashing away, getting their team going forward. From the restart Overseas scored again with Nicky Vella(9) skipping around a ruck close to the tryline, with the Grech conversion Overseas took the lead 31 to 29.
But Kavallieri were not finished yet and fought their way back upfield with Dan Moore(18) using the boot to get his team in an attacking position for Andreii Lungo to dive over near the posts from a catch and drive. Dalton’s conversion regained the lead at 36 to 31.
Sapojnicov(17) playing Prop for Kavallieri was Yellow carded for a head high tackle.

Harvey moved into prop with the injury of John Debono(1), Corcoran(22) came on at inside centre, with Mumpimhidza going to Number 8, it steadied the Overseas ship, with Corcoran breaking downfield and from the resulting ruck, Harvey bashed his way over with a few Kavallieri players on his back. Grech’s conversion took back the lead at 38 to 36.

The crowd were getting their money’s worth in this free flowing game,Perez broke down the touchline for 40 metres and as Gichane came at him, corner flagging from halfback, he offloaded to Dan Gauci(11) for him to score. Grech’s conversion making it 45 to 36.
But it was Kavallieri who had the last say in this competitive match, getting into the Overseas’ half Dalton picked the ball from the back of a ruck and outran the Overseas’ cover defence to score making the final score Overseas 45, Kavallieri 41.