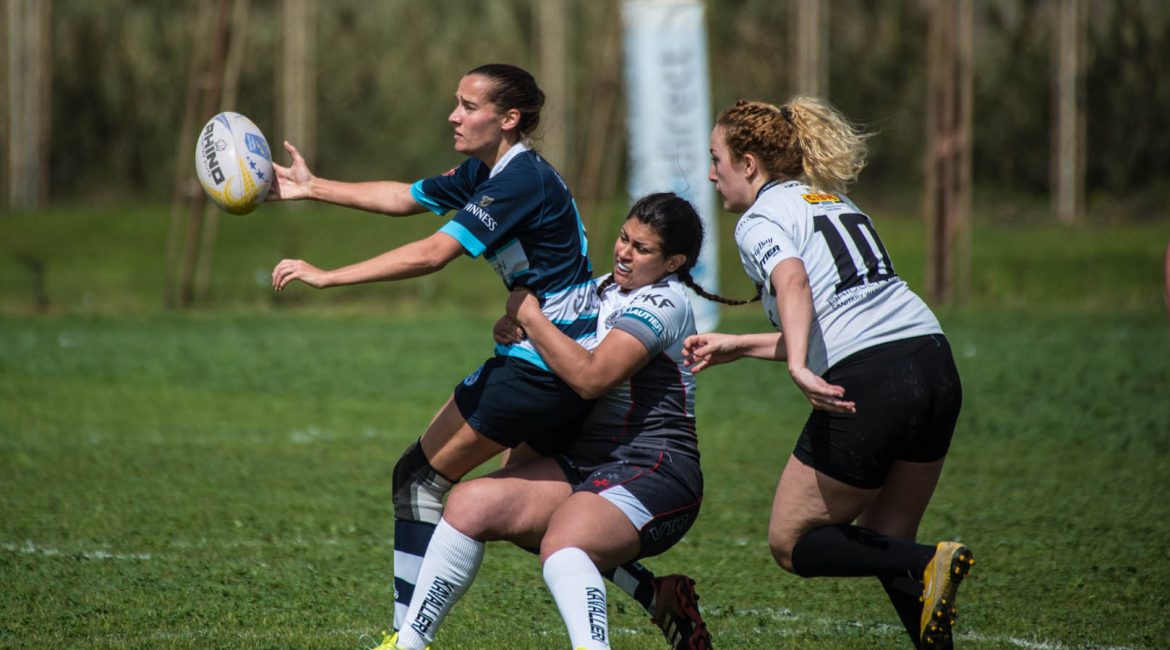 With some welcome sunshine warming the pitch, Overseas won the toss and elected to receive. From the first kick, they showed their intention to play fluidly and keep the ball alive.  Sairita Cassar made the initial break before offloading to Claire Casha. She in turn picked out Charlotte Sultana-Evans who was held up in the tackle, but managed to release the ball to Lorraine Cutajar. She fed Cassar, who ran on strongly against two defenders, She cut inside and was pulled down by Myra Bonello, but managed to ship the ball on to Ann Ward.  She drove for the line, but with her progress blocked she slipped the pass left to Sultana Evans, who had an easy run-in to score. Five individual players were involved in what turned out to be the best try of the game, with Kavallieri unable to get their hands on the ball once. The  conversion was missed.

Kavallieri were caught offside from the ensuing kick-off and Overseas were immediately on the front foot again, but this time their attempt on the line was thwarted when  a loop move by Casha and Cassar ended with a knock on five metres short. From the scrum, Kavallieri won a free kick for an early push and tried to run their way out of trouble. They forced their way to the 22 – metre line before Amanda Cassar was pulled down on the left wing, but not before releasing the ball to Bonello, who launched a brave solo run down the sideline, but was brought to ground by a high tackle. The penalty was taken quickly and was swiftly followed by another for not retreating. However, Kavallieri’s best chance of a score came to nothing when some neat interplay between Cassar and Bonello ended disappointingly with a knock on. Overseas recovered possession from the set-piece and Casha’s pass picked out an unmarked Brenda Caruana, who turned on the gas to run almost the length of the pitch, outpacing the despairing Kavallieri chase, before rounding off a brilliant solo effort with a try. The conversion saw Overseas end the first half 12 points ahead.

The second half started with a strongly-contested passage of play with both sides testing the opposition defence, until a moment of indiscipline at a scrum saw Kavallieri penalised for offside. From the penalty, Overseas worked the ball up to the 22 metre line, before Cutajar was pulled down and held in the tackle.  The quick tap was taken by Casha, who played a clever one-two with Sultana Evans and then floated a pass to Dorien Jager arriving at pace, and she powered through to touch down under the posts with the tackler still holding on. The conversion moved the score on to

Another penalty infringement in the tackle ended the next Kavallieri attempt and Jager was involved again as she made the initial break down the left before firing a slick pass to Tamsin Pace Decesare, who finished off the move in the left corner.  After a long stoppage for an injury which saw Cassar leave the pitch with a damaged shoulder,  Pace Decesare doubled her tally when she jinked through two defenders to finish off a move started by a driving run off the base of the scrum by the impressive Jager. The final score ended 29-0 in Overseas favour, after a demonstration of how offloading from the tackle together with close supporting play can pay big dividends.

Players of the match