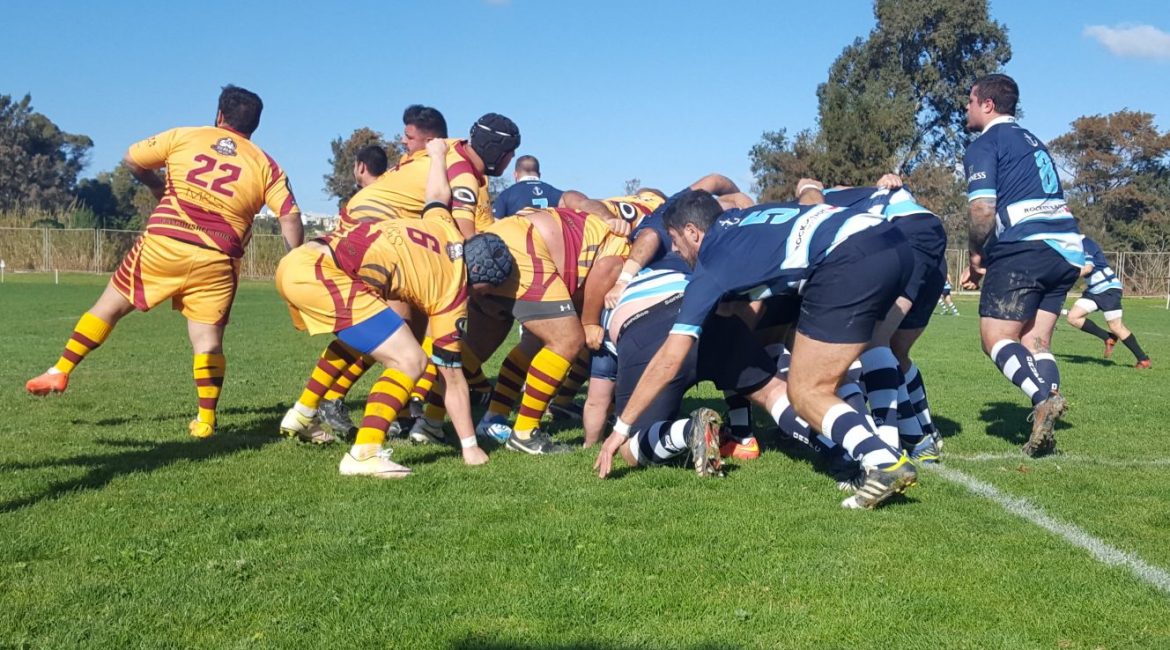 This MeDirect Cup game ebbed and flowed along with the swirling winds that swept the Marsa ground. Both teams were affected by work commitments and “Man Flu” so a number of players were playing out of position and having to learn quickly in the midst of the battle.
But having said that, the game was enjoyable to watch, as both teams tried to play Rugby and competed with passion.

Referee Joseph Cutajar got the game underway with Falcons getting first use of the strong wind, playing towards the Clubhouse.

Swieqi Overseas were playing with width, with Mupimhidza(12) usually a hooker running straight and defending well, then outside him the New Zealander, Rhodri McKenzie(13) showed all his skills, using his pace and guile to beat defenders scoring two tries and setting up another one for his fullback Cameron Brown in the first half.

But it was Falcons who opened the scoring with a Bjorn Micallef(9) try after a period of attacking play inside the the Overseas’ 22, Sam Keep(10)converted and Falcons were in front 7 to 0.

But Overseas hit back with their opening try to Cameron Brown as he ranged out wide taking a pass from McKenzie, then the two tries to McKenzie, the first from a delayed pass from Aiden Grech(10) he stepped his marker and back inside and around the fullback.
His second try was batted down by big Matt Stoker(1) standing like a mountain, the ball fell into McKenzie’s hands for him to score. Aiden Grech(10) converted one of the tries to make the half time score Overseas 17, Falcons 7.

Overseas kicked off the second half with the wind behind them, but they failed to use it, by either kicking for the corners to gain territory, or putting up the high ball to create pressure.
Instead they were tapping penalties 70 metres out and trying to score from there, burning out their forwards in the process.

Falcons defended well, were quick at the tackle, turning over the ball with Gabriel Scicluna(21) winning some valuable ball for his team. The Falcons’ scrum had the edge and won three hooks against the head and Daniel Holliday(1) and Sam Keep(10) kept their team in the game with their attacking play and resourcefulness.

It was finally Overseas who scored first in the second half, but it took them 27 minutes to break down the Falcon’s defence with a forward drive and some pick and goes, with first Mupimidza going close then Peter Debono(19) crashing over. Grech converted to take his team out to 24 to 7.
On the restart Falcons quickly took play downfield with a backline move going left with Holliday offloading a backhand pass to Jxan Pierre Zarb(15), he smoked the Overseas winger, crashed into the fullback and offloaded to Holliday for him to score, Keep(10) converted to make it Overseas 24, Falcons 14 giving Falcons a glimmer of hope.

But Overseas stepped up a gear and went on the attack, Edgar Goss(23) on as a substitute, ran hard at the corner but was hit with a head high tackle and bundled into touch, Referee Cutajar flashed a yellow card at Keep and without hesitation awarded a penalty try to Overseas, automatically giving them 7 points.

Finally Taber Hammond(8) a player who had given his all throughout the game, scored after a forward rush and bash, going over exactly on full time. Making the final score Overseas 36, Falcons 14.

The wind played havoc with attempts to run the ball, testing the skill level of the players in trying to pass both left and right, but the passion for the game was not diminished and it was a contest throughout the 80 minutes.