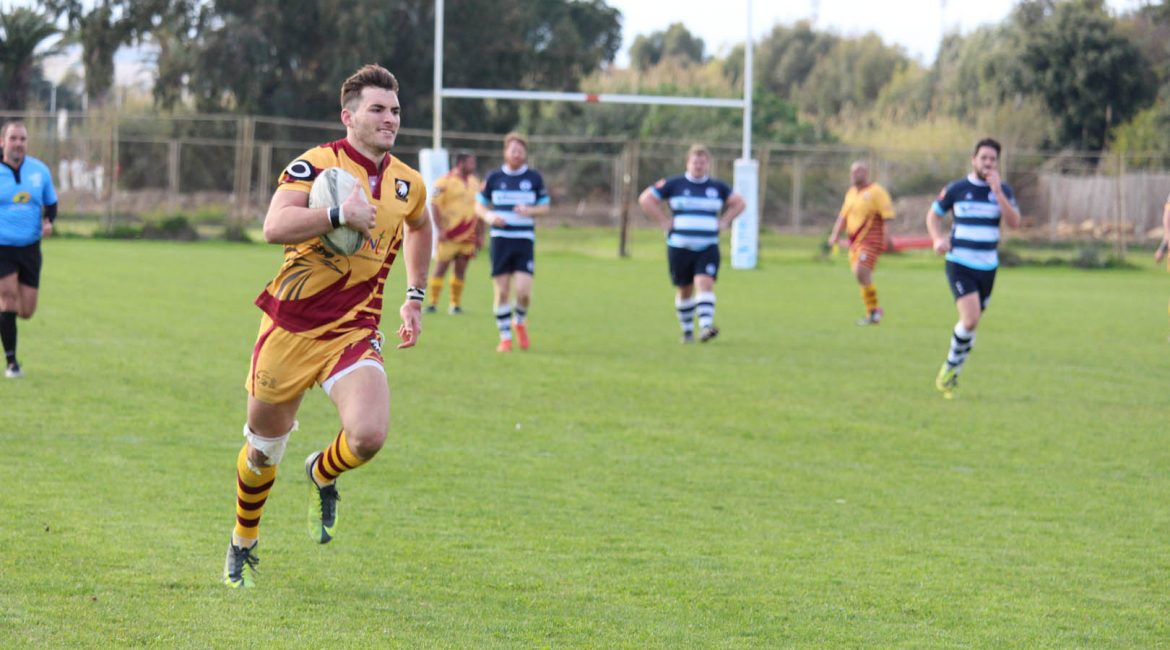 This was the first game back after the Carnival break and was a semi final game for the Me Direct Cup.

In near perfect conditions for Rugby, with just a cross wind affecting play, Referee Lionel Da Silva, assisted by two French Referees Maxim Vergnao and Ms Kim Benatar got the game underway. Both teams were missing players from injury and maybe some were still in disguise at the Carnival.
Overseas looked hungry for the win and were playing with an intensity that Falcons seemed to lack throughout the game.

Overseas were playing for territory and were not allowing Falcons to play their wide fast game, keeping the pressure on, creating a number of phases inside the Falcon’s half, finally that pressure resulted in a penalty out in front and Christian Briffa(15) from 40 metres, put the ball down the middle making it 3 to 0 after five minutes.

Falcons were trying to play adventurous Rugby but often times the forward pack were not getting over the gainline to clear the path to the tryline for the backs.

There were some excellent breaks by Julian Galea(9), Aaron Borg(12) and Liam Davis(13) but with no support, the plays fizzled out.

Two quick tries to Overseas, the first with Anthony Harvey(3) taking a quick tap from a penalty and charging for the line with his forwards pushing him over to score a try that Briffa converted, then Perez from a sweeping movement from their own 22 with Harvey, Aidan Grech(10) Andrew Schembri all handling, scoring out wide an unconverted try, to make it 15 nil to Overseas.

Falcons needed to score to get back into the game and finally they put pressure on the Overseas line going through the phases for the strong running Jxan Pierre Zarb(15) to score an unconverted try making the score 15 to 5.

But Overseas hit back with some incisive running from Luke Galea(7), Taber Hammond(8) and John Debono, then from a ruck Andrew Schembri(5) picked up and bashed his way over close to the posts for Briffa to convert. Overseas 22, Falcons 5.

A sweeping movement from Falcons from inside their half, put Bjorn Micallef(14) into space and he put the accelerator down and left defenders in his wake to score a try, to make the half time score 22 to 10 to Overseas.

The second half saw the worst possible start for Falcons, when their playmaker and scrum half Julian Galea was Yellow carded for a head high tackle, spending 10 minutes in the sin bin, at a crucial time for his team when they needed to hit back and reduce the deficit in the score. It took the wind out from under their wings and players that had in the first half carried the ball a few times, seemed to lose confidence.

A couple of Overseas breaks, with the impressive Rhodri McKenzie creating breeches in the Falcon’s defence, with just a final pass once the fullback was drawn, needing to be made, the ball was dropped.

Overseas shot out to 36 to 10 with the two conversions by Briffa.

Julian Galea gave his team some hope with a fine individual try and he converted it to make it 36 to 17.

Chris Borg(11) finally got into the game and showed his pace, running 40 metres to score going down the touchline and around under the posts for an easy conversion for Gareth Corcoran(22) who had replaced Briffa, 43 to 17.

Andrew Schembri running freely with some good ball skills, he was also the go to man in the Overseas’ lineouts ,had a powerful run down the touchline and it looked as though he would power his way through the last defender, but the smaller Earnest Degabrielle(14) cleaned him out in a courageous tackle.

Julian Galea had the last say in the game scoring a try after an Overseas’ knockon picking the ball off his toes and running 50 metres as redemption for his yellow card. To make the final score Overseas: 43, Falcons 22.