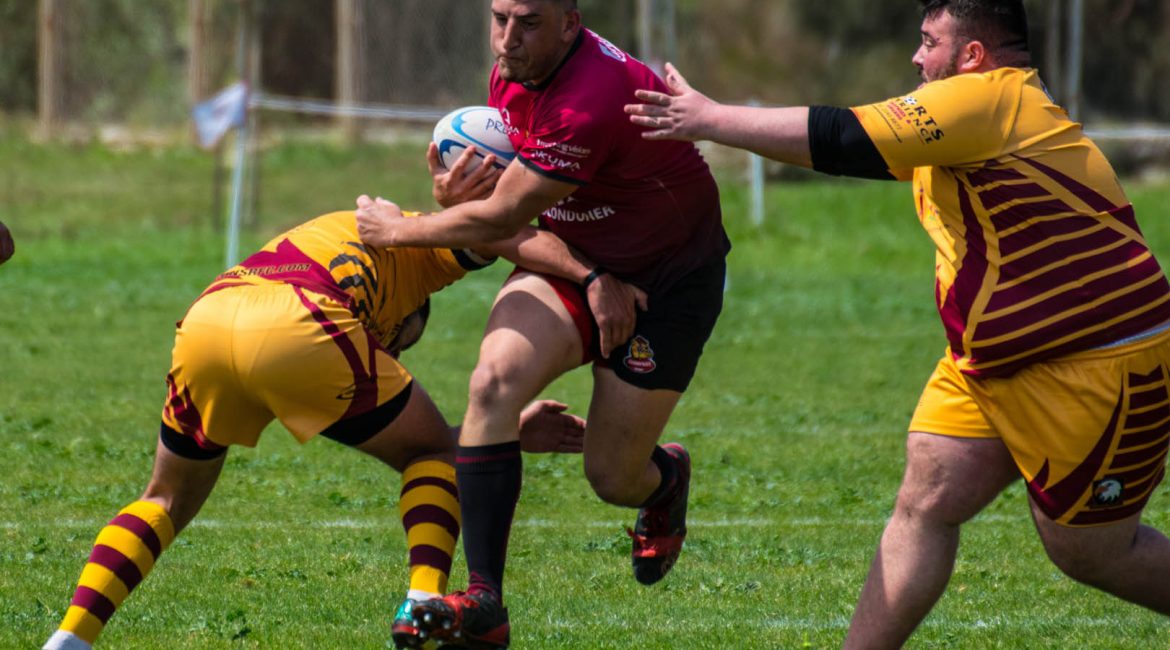 Two teams that like to run the ball faced off in this Mediterranean Bank Cup semi-final match, but it was the speed of play and a stout Stomper’s defence that shut down an energetic Falcons team. Winning the contest by 49 points to 13. It was a fast and furious affair.

Within 3 minutes of Richard Gum(10) kicking off into the strong wind Stompers scored their first try with a quick penalty kick taken after a high tackle, the ball went wide a dropped ball that went backwards had Falcons waiting for a knock on call from Referee Sean Doublesin, he waved play on and Betts(15) came into the line to score wide out. Play to the whistle boys!

The Stompers forwards were dominating in the scrum and from a strike against the head, the ball went down the blind side out to Josef Luke Azzopardi(14) and he slammed the ball down in the corner as he was tackled, making it already 10 to 0 after 10 minutes.

Falcons were trying hard to get into the game with Kawara(15) Andrew Galea(11) and Aaron Borg(12) all running strongly, but the stout Stomper’s defence shut them down every time.

Falcons got wise and started using the wind kicking into the corners for territory, putting pressure on Stompers near their line which eventually lead to a penalty for offside and Holliday(22) kicked the penalty to get his team on the board. 10 to 3.
Stompers upped the tempo of the game and went through the phases going right then left and holes began to appear in the Falcon’s defensive line, Gum shimmied his way through and angled his 40 metre run into the corner to score another unconverted try, making the score Stompers 15, Falcons 3.

Falcons swept onto a Stompers dropped ball Holliday basketball passed to his outside backs to Cost-Critien(13) who drew his opposite number passed to Andrew Vella(7) who flipped it back inside to Holliday(22) who scored, it was pretty to watch!

But Stompers stormed their way back. They tapped a quick penalty, the ball went wide and then back inside to Gum who scored and with Maylor(6) scoring from another wide movement Stompers had quickly taken the score out to 25 to 8 at the half time whistle.
Falcons kicked the second half off into the wind.
A head clash had Stompers losing Maylor(6) and Calvin Briffa(7) but it didn’t stop their momentum and they went on to score two more tries through Chris Betts running into the backline to score and Gum scored his third try taking the score to 37 to 8 with the Gum conversion.

Falcons went into a playing frenzy trying to get back into the game, throwing everything into the battle and finally were rewarded with a fine try to Andrew Vella(7) using his speed to first take a pass from a breakout from halfway, then accelerating away to score near the posts, with a conversion it was 37 to 13.
Holliday was unlucky when the two players had clashed heads he had broken through to go over, but the Referee had to stop play calling for the medics.
Kawara was showing his skills at fullback often taking down the big runners that came at him as the last line of defence, a two on one had Max Galea scoring two tries after a Luke Debattista(8) break near the end of the game, after Falcon’s Cost-Critien(13) was Red Carded for a head high tackle and back chatting the Referee.

The final score was Stompers 49, Falcons 13.