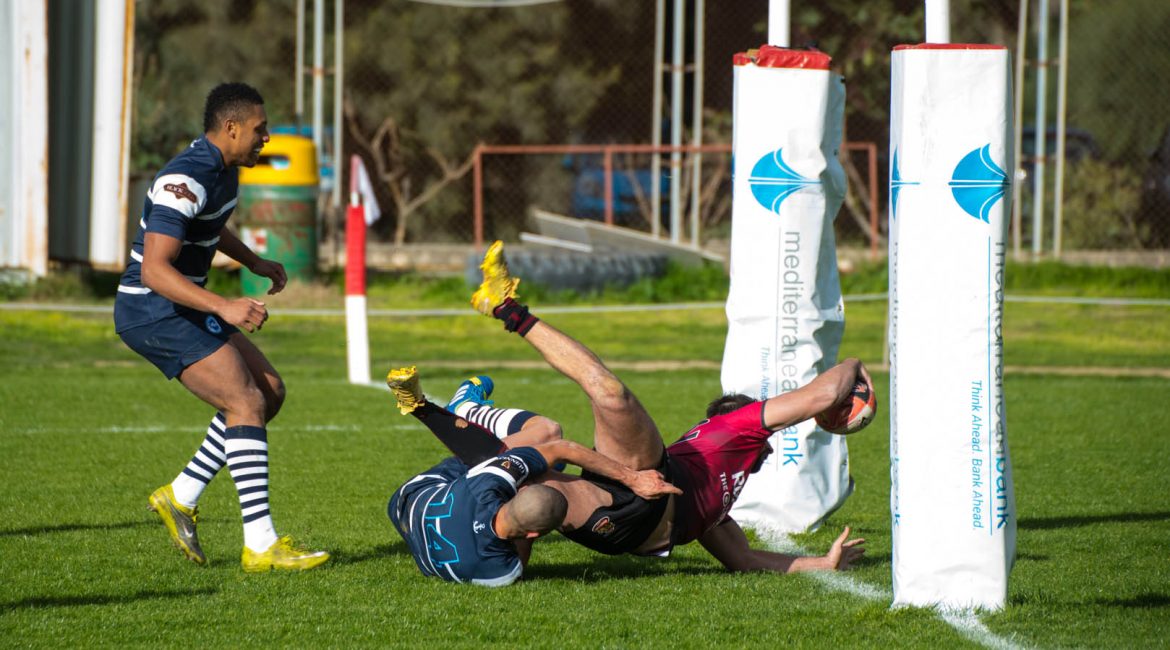 Played at Marsa in cold and windy conditions this first game of the Mediterranean Bank Cup was competitive until the last 20 minutes when Stompers’ fitness and their use of the wind, took the game away from a battling Swieqi Overseas team.

Referee Lionel Da Silva got this first game of the Cup under way with Overseas playing with the wind behind them, they drew first blood when Mahouche(11) kicked a penalty from 40 metres out. Overseas 3-0.

Almost immediately Stompers went on the attack with Richard Gum(10) side stepping his way through the Overseas defence and took the ball to the Overseas tryline, a head high tackle was penalised, from a quick tap Cerketta(5) bashed his way toward the line, then a knock on gave Stompers a scrum.

From the scrum Gum(10) worked a 10/12 cut with Camilleri who was initially held up, but his forwards got behind him and drove him over to score to the left of the posts a converted try, with Gum adding the extras it was Stompers with their nose in front 7 to 3.

The Stompers set piece was strong with Isaac Bezzina(4) dominating in the lineout with some excellent throwing in by Josef Busutil and their scrum causing problems for Overseas, shunting them backwards and not allowing them tidy ball to their scrumhalf Holland(9).

From a scrum Jeremy Debattista(22) broke through tackle after tackle, running 30 metres to score near the posts for Gum to convert, bringing the score to 14 to 3 to Stompers.

Gum was controlling proceedings at flyhalf and even his kicks into the wind, were causing Overseas problems at the back as the Stompers backline charged through after the ball.

Gareth Corcoran(10) was trying to get Overseas on the front foot, but there was a lack of continuity as he tried to work the ball wide, cold hands at times dropping the ball.

Rhys Barry(12) who had replaced Beppe Sammut(12) floated a beautiful penalty kick from 50 metres out to within 5 metres of the Stomper’s tryline. From the lineout Overseas had a catch and drive to the line, for their Captain Anthony Harvey(7) to score, to bring the points to Stompers 14, Overseas 8.

Jamie Murray at No 8 for Overseas was having a good game, bashing away in attack and putting in some hard tackles to thwart some promising Stompers’ plays.

Overseas had a good period of play attacking the Stompers’ line, putting them under pressure and on the back foot. From a ruck Corcoran took the ball to the line and crashed over, to make the half time score 14 to 13 to Stompers.

But that wind is worth 20 points and now Stompers will have it at their backs in the second half.

Referee Da Silva got the second half underway with Stompers having the use of a strong wind. Gum(10) uses it to drill a penalty from 40 metres out to move further in front by 17 to 13.

Overseas raised their game knowing they needed to score to reign in a Stompers team, that was gaining in confidence.

From a series of attacks by Overseas on the Stompers line, Mathew Spiteri(1) was yellow carded for going off his feet, trying to slow down an Overseas attack. Overseas then attacked the line with quick taps from a series of penalties, the ball  then went wide to Barry(12) as he lunged for the line a head high tackle stopped him in his tracks, but he reached out to dot the ball down in the corner, to put Overseas in front by 18 to 17.

But in the last 20 minutes, whether it was a lack of fitness, or too much turkey for Christmas, Overseas fell away and Stompers forced their advantage, scoring three more tries with Luke Debattista scoring his hat trick, first with a double around play giving him an overlap out wide, to score his second try and then from a Gum offload as he hit the gainline, for him to score his third try.

A penalty that bounced off the cross bar had Overseas in all kinds of trouble, Stompers pounced on the loose ball and went wide left to Julian Caruana(11) who flashed down the touchline to score, making the final points of this Mediterranean Bank Cup game: