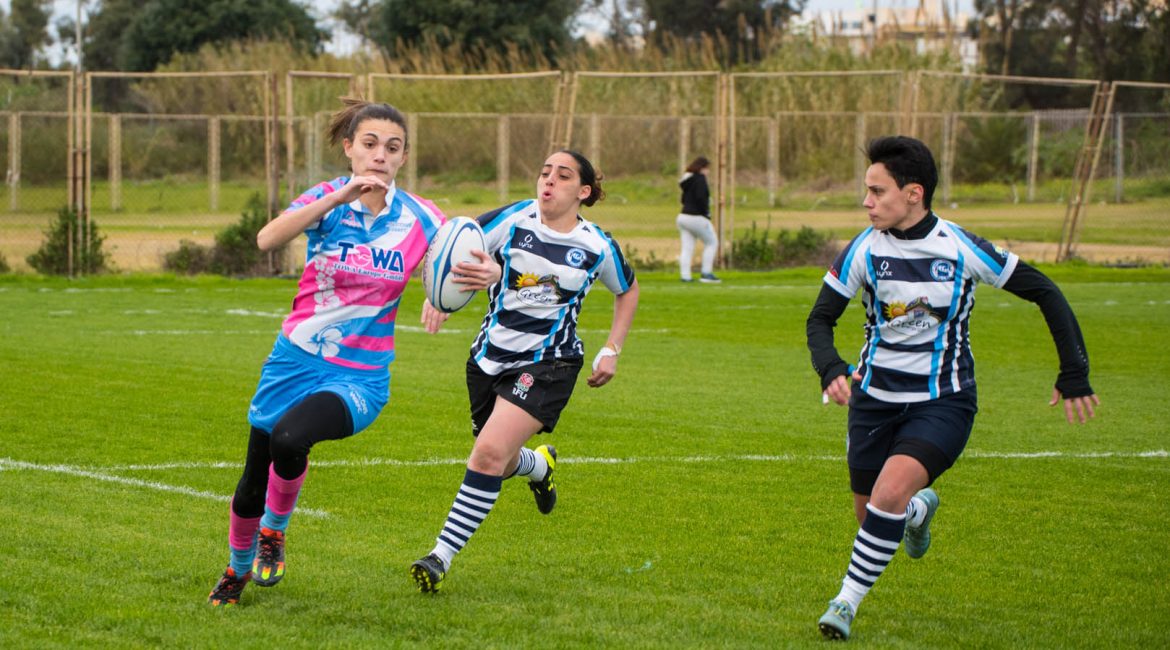 Kavallieri kicked off into a chilly, blustery wind and in their first meaningful attack, Overseas captain Charlotte Sultana – Evans broke through the centre, but threw the ball forward when tackled 15 metres out. Overseas won the scrum against the head, and Claire Casha set up Noemi Perez Corral for the first converted try. Overseas attacked again, fly-hacking the ball up the right wing, but were caught offside. Kavalleri let the ball run loose from their penalty and Emma Grech scooped up the ball and put in a speedy lateral run before straightening to score in the left corner on the stoke of half time. A scrappy half ended with Overseas ahead by 12 points.

Kavallieri received the ball from the second half kick-off and tried to run the ball from their own 22, but Jacqueline Richards spilled the pass from Dorien Jager, and Overseas moved the ball quickly along the line before Wendy Pace finished the move by touching down for her second score. Kavallieri fought back with two quick tries, both started by Amanda Cassar, and both finished by powerful sprints from Jacqueline Richards, the second from 60 metres out. Neither was converted, and the score remained at 17 – 10 until in the final play of the match, Tessabelle Sultana-Evans put in a surging run to score from halfway, and the try was converted.

Kim Riola opened the scoring for Falcons with a stunning run from her own 22 metres line, which was converted by Marion Azzopardi. These were the only points in the first half. In the second half, Overseas drew level when Vanessa Attard sprinted clear from halfway, managing to avoid a last desperate tackle from Katya Vrbacka. Overseas drew 7 points ahead when Charlotte Sultana-Evans took a quick tap penalty from 10 metres out and powered through two tackles to score, and then converted her own try. Falcons struck back when Vrbacka showed strength on the line to stretch an arm out of the tackle and touch down after Tessabelle Sultana-Evans had broken clear and slipped the ball to her. The game ended controversially when Kim Riola put in another trademark looping run before angling in to dive over Evans covering tackle, but appeared to spill the ball forward before applying pressure. However, the referee awarded the try and Falcons edged the win.

Katka Vrbacka struck early to put Falcons 7 points ahead when she broke through a strung-out defence on halfway, and then converted her own try. However, Amanda Cassar put the scores level when she broke through the Falcons defence in a similar fashion and also converted her own score. Kavallieri attacked again from the restart, but Falcons won a penalty on their own 5 metre line, and worked the ball out to Caroline Gafa, who showed a fine turn of speed to run 60 metres, breaking through Alena Simina Nesu’s tackle on the way. Kavallieri were then put on the back foot by some concerted attacking from Falcons, conceding several penalties, the last of which Marion Azzopardi took quickly and fired a pass to Donevellon Sladden who dived over to score.

With the half-time score at 17-7 to Falcons, Kavallieri immediately clawed back 7 points when Falcons fluffed the kick-off, Jacqueline Richards received the ball from the resulting free kick and sprinted half the length of the pitch to score. They took the lead soon after, when Falcons were caught in possession on their 22 metre line, the ball was stolen by Amanda Cassar, and she broke through to score and convert. Richards was proving to be unstoppable, and she powered over for her second converted try. Trailing by 9 points and attacking desperately, Falcons needed to score twice, and although Vrbacka put them within sight of the victory by scoring and converting,  Kavallieri held on until the final whistle and finished worthy winners.