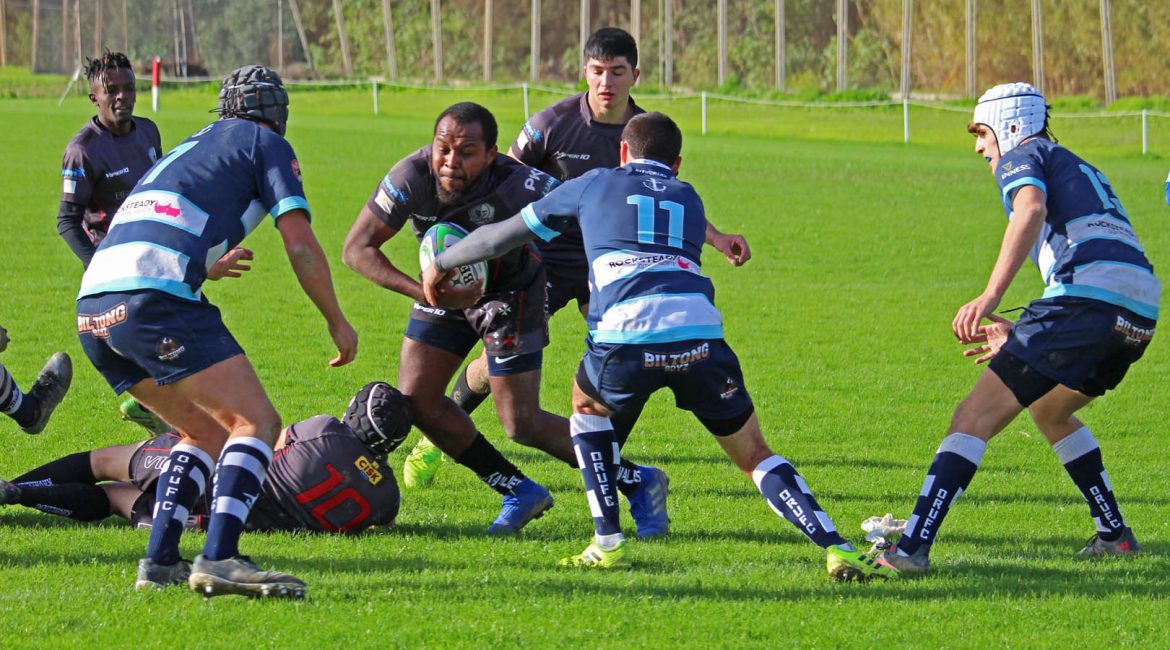 In a game dominated by gale force winds, Kavallieri playing into it in the first half, ran out the winners by 34 points to 12, over a battling Overseas team.

Kavallieri had won the toss and chose to play into the fierce wind, knowing that if they could shut down the Overseas’ running game, they could blow them away in the second half.

The half time score was 10 points to 7 to Kavallieri, with Overseas not using the wind enough to their advantage, coupled with a strong Kavallieri defence, they could not score enough points to keep the pressure on the Men in Black.

But Overseas did score first, after Kavallieri knocked on from the kick off, awarding them an attacking scrum inside the Kavallieri 22. From an initial attack through the backs into the corner, Tim Cleasby(5) drove around the fringes to score for Overseas to take an early lead, which showed some promise for his team.

But quickly Kavallieri got back into their stride and after a series of penalties by Italian Referee Vincenzo Schipani, they attacked the Overseas line from a tap penalty, with first Nathan Zammit(7) going close, then offloading to Ousman Konate(8) who dived through the legs of the defenders to score.

With just 15 minutes on the clock Kavallieri scored the try of the match, starting from back within their 22, Jethro Zammit Randich(13) set off, stepping the defence and offloading to the speeding Lloyd Mhiripiri(15), he blitzed the Overseas cover defence out wide, to run around towards the posts to score a try, that had the spectators on their feet.

As Overseas tried to bite off territory with kicks, it was Mhiripiri’s speed that put Kavallieri back into the game, as he ran it back, linking with his team in front of him.

Overseas should have scored, but with the line open and at their mercy, their winger dropped the final pass, to frustrate his team.

The Kavallieri scrum was pushing Overseas all over the field, not allowing them any attacking ball and the penalties turned the ball over to a pumped Kavallieri pack, being lead with power by Terence Galdes(3).

With the start of the second half, with Kavallieri now playing with the wind at their backs and being up by 10 points to 7, the prediction was, that Kavallieri would run away with the game.

But the passion of Overseas team kept them in the contest, not having any accomplished playmakers, they made up for it with their commitment to the cause. Although on saying that, we have to mention the grit and guile of Theo Briffa(13) who tried everything, to get his team into the game.

But with a scrum going backwards and Kavallieri beginning to use their backs, Overseas suffered three tries in 12 minutes, first by Tom Tattersfield(20) scoring out wide, Galdes scored after a tap penalty, maul and then shove over in the corner, then Konate used his power to force his way through a stretched Overseas defence to touch down, taking the score out to a more respectable 27 to 7, after all their forward dominance, with the sole conversion by Kyle Charlton(12).

Jake Pace at flyhalf was starting to control the game, sending the ball out to his big forwards Galdes, Branton Bonello(5) and Nicholai Grech(4) with the loose forwards Nathan Zammit(6) and Konate beginning to roam wide receiving front foot ball.

On a rare second half attack by Overseas into the Kavallieri 22, with Theo Briffa featuring in several plays, the hard grafting Tim Cleasby bashed his way over wide out, as scrumhalf Pascal Holland switched play from side to side. It was an emotionally celebrated try, after the forwards had put in an immense effort, to get them into a scoring position.

But Kavallieri had the last say as they attacked the Overseas line, with Konate running strongly and as he was tackled short of the line, Chris Desira(17) picked up and dived over and then with Charlton’s conversion Kavallieri won the game by 34 points to 12.

Referee: Vincenzo Schipani from Naples, was in Malta as part of the Malta/Italy Referees exchange program.

Men of the Match: