Falcons swoop with the wind, to beat the Champion Stompers 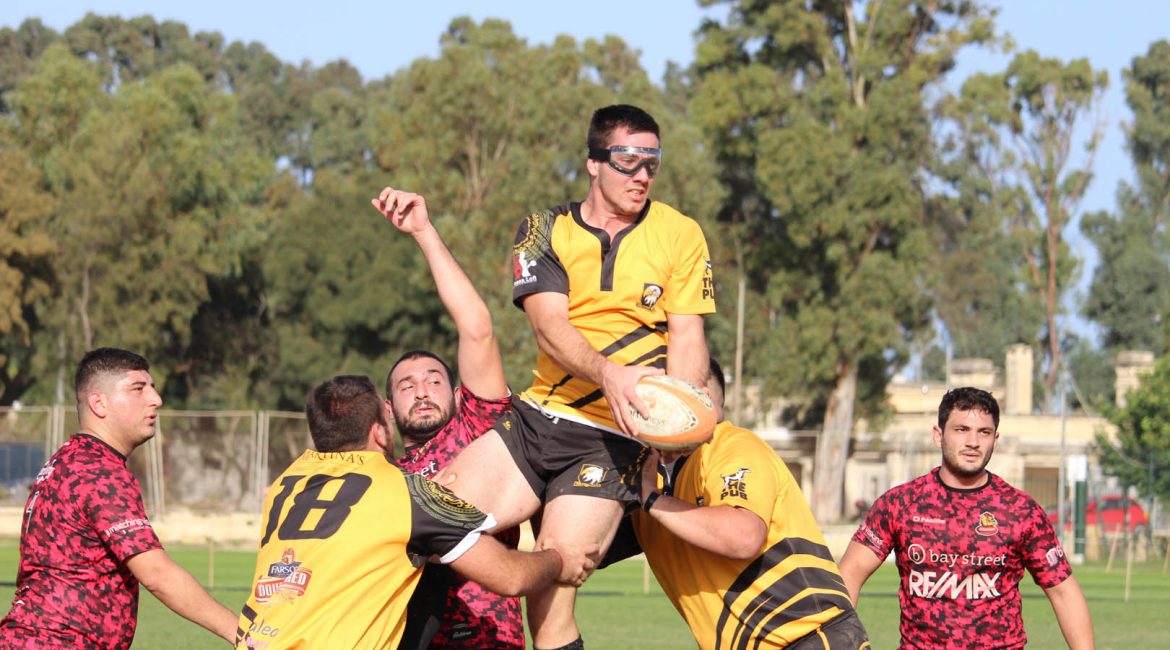 The last time these two teams had faced each other it was a 28 to 21 win to Stompers, but this is a new season and the Falcons, who have been together since Under 18 Rugby, came of age in this free running game, by 41 points to 27.

Both teams seemed a little nervous in this Cisk Lager League Round 2 game and play did not flow accordingly, as knock ons and wayward passes went to ground, affected by the swirling wind.

Richard Gum(10) put the first points on the board after an over eager Falcons player was penalised for offside, as Stompers attacked into the Falcon’s 22.

But Falcons hit back, running deep into the Stompers half, winning a penalty, then with a quick tap and bash for Daniel Holliday(1) to score under a pile of bodies.

Playing with the wind and sun behind him, Gum’s restarts were causing problems for Falcons, as they dropped several restarts putting themselves under pressure.

From a scrum restart with Avramovic(9) providing quick service to his backs, the ball went wide with Milan Auport(15) running into the backline, stepping out, then in, he scored for Stompers to take the lead 8 to 5, with 15 minutes on the clock.

A Yellow card was flashed for a deliberate knock on, as Falcons were hot on attack, with a break up the middle from their little scrumhalf Antoine Vergeon, then as he set up his winger for a run in to score, Stomper’s JJ Micallef(11) slapped the ball down, he was then marched to the Sinbin by Referee Gabriele Raposa Sainz.

From the lineout from the penalty, a smart play by Holliday(1) around the front of the lineout, for him score in the corner. It was now 10 to 8 in favour of Falcons.

Play went backwards and forwards for the remainder of the 40minutes with Dragan Cerketta(3) scoring from quick ball from his scrumhalf Aljosa Avramovic from a tap penalty, Gum converted and Stompers were back in front 15 to 10.

Falcons launched a series of attacks from lineouts close to the Stompers line, winning a penalty and like a flash Vergeone(23) tapped and dived over, with the Stompers still arguing with the Referee. Making it 15 all.

But the Champions quickly got back into their stride putting fullback Auport in at the corner to score his second try.

To end the half Dimitrije Avramovic(10) for Falcons, was yellow carded for repeatedly back-chatting the Referee.

With the wind behind them and being only down by 20 points to 15, Falcons seemed to grow in confidence and stature, a Red Card had reduced Stompers to 14 men and Falcons swooped, scoring tries by Andre Galea(20) Erakovic(7) Brendan Dalton(15) and a third try hat trick to Daniel Holliday, as “Pancho” rode again with a catch and drive from a lineout to force his way over, taking the score out to 41 to 20 with the  three conversions by Liam Davis(14).

Stompers were trying to get back into the game with their big forwards Ellul, Hili, Cerketta, Zanin, all trying to get some go forward, but Falcons had shut the door tight with their defence.

In the final minutes of the game, as Stompers chased a bonus point, Avramovic(9) scored from a quick tap penalty near the posts, with Auport’s quick drop kick conversion to make it 41 to 27, they were hoping to score again, to get within 7 points to earn a bonus point, but a mistake from the kickoff ended this free flowing game of Rugby with Falcon’s victorious 41 to 27.

A Red Card and two yellows to Stompers deflated their comeback in the second half, although two yellow cards to Falcons also dented their ambitions at times.

Coaches’ “Men of the Match”: