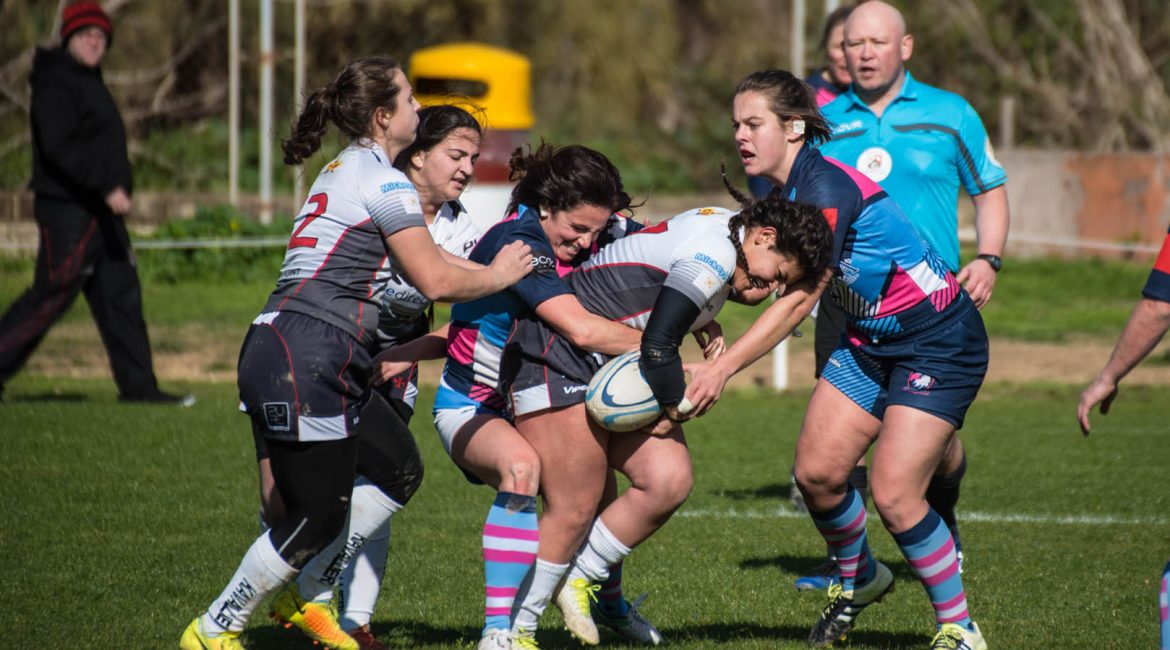 With some welcome sun on their backs, Kavallieri kicked off and immediately felt the full force of Falcons speedy Katka Vrbacka as she deftly fielded the kick and set off on a blistering run, weaving left and right to evade two despairing tacklers before dotting down under the posts. Marion Azzopardi converted to put Falcons 7 points up with Kavallieri looking bemused. However, they responded brilliantly from the initial shock. From the restart, they were awarded a free kick when the ball failed to make the 10 metre line. From there, they launched a wave of attacks on the the Falcons try line, with powerful running and carrying from Lawra Grima, Francesca Schembri and Justine Zammit. Under intense pressure, Falcons were forced to give away two penalties for offside, the second one right on their own 5 metre line after Zammit was hauled down by three defenders in a driving maul just inches from the line. Myra Bonello took the tap and the ball was shifted left along the line, but desperate defending by Falcons ended in a fumble which Azzopardi gratefully scooped up and offloaded to Carole Casparis on the wing. She made ground, but the ball went loose in the tackle, Kavallieri recovered possession and won another penalty for Falcons third offside infringement. Bonello again showed power to attack the Falcons defence, but was hauled down and the ball was knocked on by Kavallieri as they scrambled to recover. Casparis tried to launch another attack from deep, but the move broke down with yet another offside whistle. Kavallieri went straight back on the attack and threw everything at Falcons as they tried to pierce the defensive wall. First Cassar, then Zammit made inroads before Schembri lost possession on the right wing with the try line begging and Falcons won a reprieve. They worked the ball from left to right along their own 5 metre line to Casparis on the wing. She unleashed a powerful run to take her deep into the Kavallieri half, before being caught. She slipped the ball to Vrbacka, who was backing her up well, and she in turn blew a path through the last tackler to score her second try against the run of play. The conversion was good and the half time whistle saw Falcons turn around 14 points ahead.

The second half got underway with a Falcons high kick gathered by Maria Spiteri who fed Anna Skinner, but the ball ran loose and was kicked into touch for a Kavallieri line-out. Falcons stole the throw in and Azzopardi breezed through the static Kavallieri defence unchallenged before converting her own try to extend the lead to 21 points. Falcons retained field position and momentum in the next passage of play before a knock-on gave Kavallieri the scrum and a chance to counter. Spiteri and Cassar worked a clever dummy switch which created the space for Cassar to recover brilliantly from a tackle to put in a scintillating run upfield before popping the ball to Spiteri, who cleverly jinked round Azzopardi to complete the best try of the game.
Kavallieri kept up the pressure from the restart to pin the Falcons back in their own half, but were held out by a well-organised Falcons defence. Twice, Falcons tried to break away, but the first move ended when the ball was thrown forward and the second petered out after a dropped pass. Finally, Azzopardi kicked into touch to bring an entertaining game to an end, with Falcons ruling the roost 21 points to 5 thanks to their individual pace, but Kavallieri finished the game on the front foot and showed promise with some strong attacking phases.