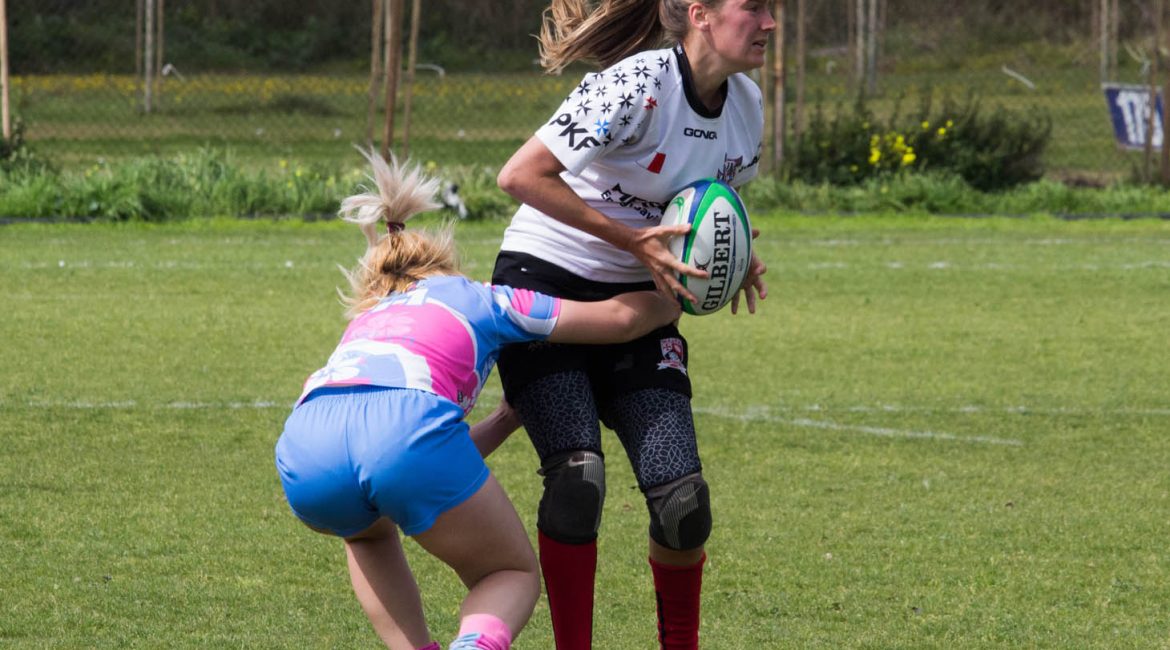 Falcons won the toss and elected to kick off with the strong wind behind them. The high ball was caught by Maria Spiteri who tried to set up an attack, but the ball was knocked on. Kavallieri were pinned in their own half and possession changed hands twice before Falcons were awarded a scrum from a Kavallieri knock – on in a dangerous position on the 5-metre line. The ball is hooked back quickly to Carole Casparis, who is tackled on the line by Spiteri, but managed to ground the ball for the opening try. The conversion was missed by Casparis.

From the Falcons high kick – off, the bouncing ball was gathered by Myra Bonello and taken to ground. Possession was recovered, but Kavallieri showed a lack of judgement by opting to kick the ball forward, unfortunately handing possession straight back to the pacey Kimberly Riolo, who gratefully ran in between the posts for Falcons’ second score. This time the try was converted by Casparis to take the score to 12 nil.

Another high, testing kick off put up by Rodianne Bugeja was knocked on by Kavallieri and the resulting attack from first Marion Azzopardi and then Katka Vrbacka was halted when a penalty was awarded against Kavallieri for not releasing the player. Another probing run from Riolo tracking left along the 5-metre line and looking for space in the defensive line was ended by a high tackle. The referee signalled advantage, and Donnavellon Sladden pounced on the loose ball to score what would have otherwise have surely been a penalty try. The conversion was successfully landed, and the first half ended with Falcons up by 19 unanswered points and on the attack when the whistle saved Kavallieri from what looked a certain try.

Kavallieri started the second half with much more determination, and their first real attack of any substance down the right wing by Rebecca Tanti was halted by Vrbacka, but a penalty was awarded against her just over the halfway line. From the quickly taken tap, Spiteri sent Bonello spearing through the sleeping Falcons defence and she ran 40 metres to score. Justine Zammit missed the conversion.

Kavallieri continued their revival in the next period of play, leading to two penalties in quick succession by Falcons after some desperate defending against Bonello and Francesca Schembri. From the second of these, Spiteri moves the ball right, but Bonello’s subsequent pass to Alina Nesu was cleverly intercepted by Casparis, who was gifted an easy run-in to the line. Again, her conversion attempt was missed, but the Falcons lead had stretched to 24-5.

Kavallieri continued to pressurise Falcons after the score and put in two sustained assaults on the Falcons defensive line, both of which ended in penalties. Marion Azzopardi was the player to be sent to the sinbin for repeated team offences.

The Kavallieri revival fizzled out, however, as Falcons regained the upper hand despite being a player down. Their final attack was ended when the ball was knocked on by Sladden just inches from the line. The final whistle arrived with the final score remaining 24-5 in favour of Falcons