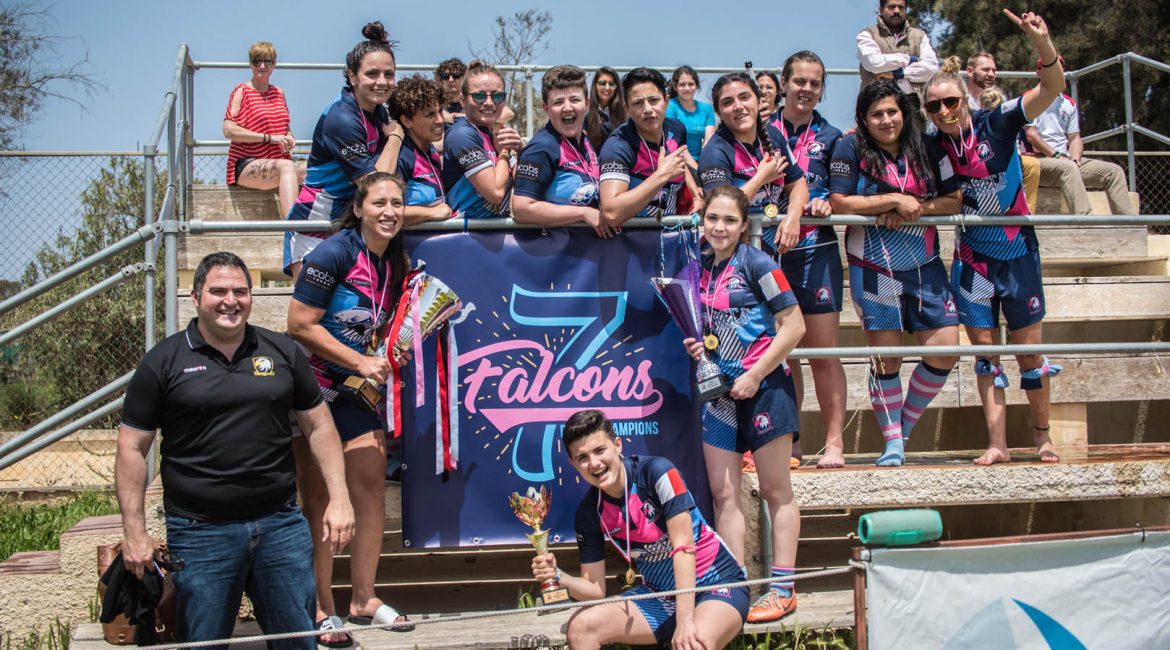 Falcons brought their unbeaten season to an end with a clean sweep of trophies, adding the Ben Bennett League Cup to their impressive haul with this win. Overseas started brightly, and after an initial scrum when Falcons knocked on, exerted a period of sustained pressure on the Falcons defence. Anna Ward, Wendy Pace and Tamsin Pace Decesare interlinked nicely to launch Dorien Jager down the wing, but she was repelled by a strong tackle from Carole Casparis.  They held on to the ball, however, and Sairita Cassar arrived at pace, bursting through the central cover to power in and score under the posts. The conversion was missed.

Falcons retaliated almost immediately, when the ball went to ground after the restart and was recovered by Casparis, who put in a powerful 50-metre run down the left wing to touch down, leaving the chasing Decesare floundering in her wake. She converted her own try and Falcons edged ahead by two points. They won a line-out on the Overseas 5-metre line after a long kick from Casparis, but knocked on while trying to set up an attack. Overseas played a good advantage and drove the ball almost to halfway, before Jager was bundled into touch. The line-out was not straight and Overseas elected to take the throw again, won the jump and shipped the ball infield. The ball was dropped by Jager, but it was not adjudged forward. There was a suspicion of offside as Pace Decesare recovered possession and set off for the Falcons line from her own half. Her surging run caught the Falcons napping and her speed blew away the chasing Bascetta as she raced in to score. The conversion was missed, and the half-time whistle saw Overseas hold the advantage 10-7 as the teams turned around.

Overseas were soon to relinquish the lead, however, as a resurgent Falcons outfit went on the attack immediately. From the first scrum, which they won, Vrbacka and Casparis combined beautifully with some slick handling to pressurise the Overseas defence down the right flank. Casparis went for the line, but was hauled down by Pace Decesare a few metres short. She managed to offload to Beverie Sultana arriving on a charging run and no-one was going to stop her scoring from that range. She dotted down under the posts and the try was converted by Casparis to give the lead back to Falcons by four points.

Overseas desperately tried to force their way back into the game, and from a line-out deep in their own 22, they managed to work their way into Falcons half. Charlotte Sultana Evans injected some pace into the move with a blistering run, but her pass to Noemi Perez Corral was knocked on and the promising attack came to an end. Caroline Gafa, playing advantage, cleared the danger and Falcons countered with an attack of their own which ended with Rodianne Bugeja running out of space down the left wing and she was marshalled into touch. The ball was knocked on by Overseas in the line-out and this error proved fatal as, from the resulting scrum, Falcons set up another onslaught on the Overseas defence. They switched the ball left and right along the line, before Donavellon Sladden dummied her marker to make the critical break and slipped the ball to Kim Riola. She cut inside and picked a brilliant line to slip between two defenders and turn on the burners to score. The conversion went astray, but Falcons were crucially two scores ahead at 19-10.

Overseas tried valiantly to make inroads into the Falcons half from the next line-out, but Cassar’s powerful break was wasted when Pace dropped the final pass and the referee brought the game to an end. Overseas had rattled the slick Falcons outfit, but ultimately it was their tackling in the red zone which let them down.