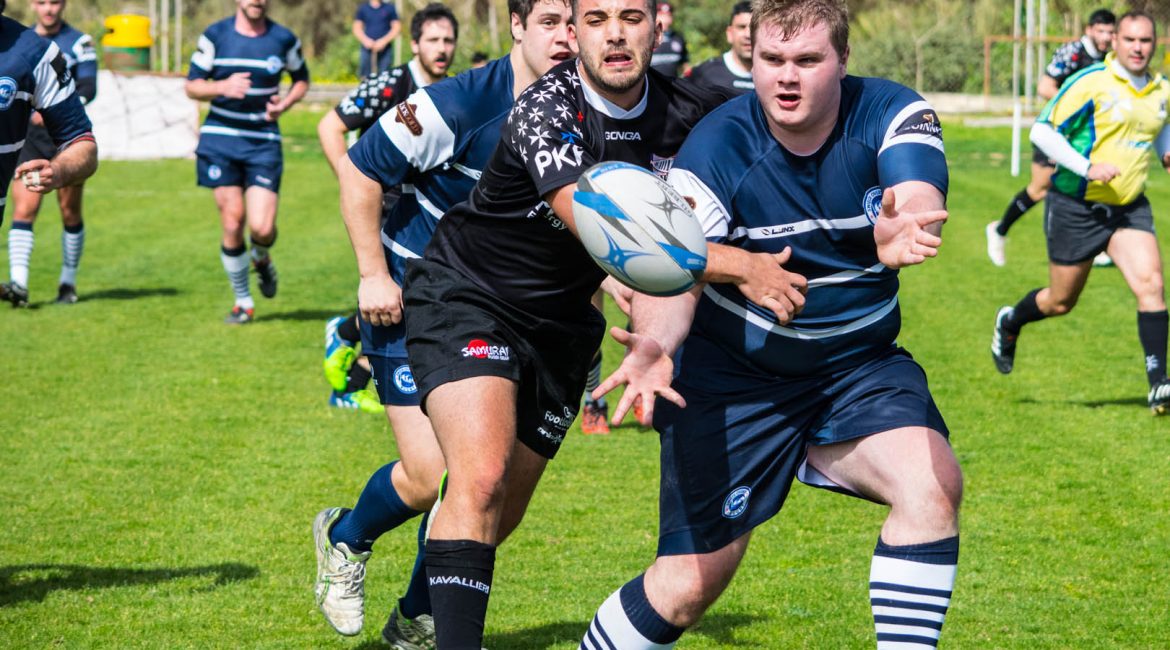 This Cisk Lager League game took a long time to get going and the first half was a veritable slog until the Angel intervened…… by the name of Angel Sarres(12) as he took the game by the scruff of the neck scoring four tries to take the game away from a fighting Kavallieri team, who just could not break down the Overseas defensive wall.

Kavallieri kicked off with the wind behind them and went on the attack with some good counter rucking and won a penalty which Darren Edmunds(10) kicked from 40 meres to put them in the lead 3 to 0.

Overseas were having trouble, their game just wasn’t flowing with dropped passes, wrong options and individual players trying to do too much, without linking to the rest of the team.
From a poor clearing kick by Kavallieri, Overseas launched a long range attack, sweeping right then left to put Rhys Barry(13) in for a try to make it 5-3 to Overseas.

On attack Edmunds grubbered a ball through, but it hit the posts and was reclaimed by Overseas. Brenda Dalton(23) sprinted down the touchline, dived over in the corner, but lost the ball in flight.
Clayton Cassar(8) running strongly offloaded to Barry who grubbered through, Roderick Borg(15) gathered and offloaded to Jamie Murray(7) he went to ground, the ball then swung right to Angel Sarres(12) who powered his way over, Briffa converted, Overseas 12, Kavallieri 3.

Overseas won a tight head in the scrum, Christian Briffa(10) stepped then offloaded to Sarres who scored again for Briffa, it was now 19 to 3 for Overseas.

Just on half time Dalton was yellow carded for holding back Sarres as he chased a through ball, Referee Lionel Da Silva sending him to the sin bin for 10 minutes.

The second half started with a flourish by Overseas, they scored two quick tries, first by Harvey(3) from a rolling maul from a lineout, then Sarres after Cassar and Stoker(1) bashed their way over the gain line, Sarres then dummied and stepped his way to score, with one of the tries converted the score had shot out to 31 to 3.

Referee Da Silva had to be tended to for an ankle injury, but he soldiered on, showing true grit!
A messy period of play by Overseas, with the ball bobbling about and passes going behind the intended players was tidied up by Sarres, who stepped through the onrushing Kavallieri defence to score his fourth try, with Briffa’s conversion it was now 38 to 3.

It was then Briffa’s turn to show his skill as he dummied and sidestepped on a diagonal run to score, Sarres converted and the score was out to 45 to 3.

Harvey scored again showing his skills from 20 metres out stepping his way to the line to make it 50 to 3.

Then Coach Dan Moore, who had replaced the injured Edmunds for Kavallieri, showed his skills first using the boot to gain territory, then a grubber kick through behind the Overseas backs sitting up nicely for the onrushing Dalton to score and with the Nick Horne(13) conversion the final score was Overseas 50, Kavallieri 10.
Men of the Match: Overseas: Angel Sarres. Kavallieri: Mattia Dante.